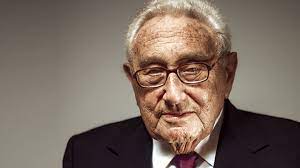 As Wimbledon gets into full swing once again, I am reminded of one of the most poignant remarks that I ever heard John McEnroe make and his replying to the person he was in conversation with at the time: “You know, the older I get, the better I was”.

A lesson in those words for all of us perhaps but for some reason or other that I cannot explain it made me think about Henry Kissinger.

US politician, diplomat and geopolitical consultant, a Nobel Peace Prize winner, Hon Knight Commander of the Most Distinguished Order of St Michael and St George, former US Secretary of State and National Security Advisor Henry Kissinger celebrated his 98th birthday last month. Now I well accept that after decades of deliberation the jury remains out as whether the Kissinger style of diplomacy left the West in a better or worse place. I will however stick my neck out and say that it probably did.

Henry Kissinger most notable achievements in public office were probably, on behalf of the later disgraced President Richard Nixon, establishment of a formal relationship with China and representing the US in Paris at the Vietnam peace talks that eventually led to the 1973 Paris Peace Accords – or as some might prefer to call it – agreement on US capitulation and withdrawal from Vietnam that Richard Nixon had promised would be ‘Peace with Honor’.

With Kissinger having laid the foundations for a presidential visit to China in an earlier secret visit, it is perhaps interesting to recall that this year marks the fiftieth anniversary of the Nixon/Kissinger visit to China – one that with the benefit of hindsight would be deemed to be a complete failure for the Americans.

In a recent article published in CounterPunch US author Paul Ryder recalls:

“In Beijing, Nixon and Kissinger met briefly with Chairman Mao Zedong. The ailing Chinese leader insisted they only discuss “philosophical” topics and conduct business with Premier Zhou Enlai. Nixon later described Zhou as “the greatest statesman of our era.” He and Kissinger soon learned Zhou was also a formidable negotiator.

The first agenda item, Taiwan, was relatively easy. On his previous visits, Kissinger had already told Zhou the United States was ready to acknowledge Taiwan as a province of the People’s Republic of China, and thus give up on Chiang Kai-Shek’s ambition to rule both Taiwan and mainland China. Without those concessions, normalization of relations with Beijing would have been impossible and so would further talks on any subject.

On the other item in the proposed trade-off, Vietnam, they found Zhou to be unyielding.

He told the two Americans, “Why not give this up? You should adopt a most courageous attitude and withdraw. If the war in Vietnam and the other two countries of Indochina [Laos and Cambodia] does not stop, no matter what form it continues in, it will be impossible to relax tensions in the Far East. We will, of course, continue our aid to them. We do not have the right to interfere in their position nor put forward various stands. We have no right to negotiate for them.”

The conclusion to be drawn from the Nixon/Kissinger negotiations with China was put rather succinctly by Nixon himself – China got all that it wanted and the US got nothing!

Just three years ago Henry Kissinger pronounced that “We are in a very, very grave period” – a reference which if I recall correctly was to the worsening cycle of geo political relations caused by a number of factors including what appears to be further escalation of Donald Trump’s trade wars with China, the European Union and Iran together with growing tensions with Russia and elsewhere. The Kissinger remarks were even then quite telling.

What follows is taken from a ‘Commentary’ published in July 2018. While some aspects mentioned are already history, given the continuing geo-political uncertainties and rising tensions, this may be worth repeating:

In a period when nothing is certain and nothing can be taken for granted in respect of geo-political relations there appears to be a distinct lack of understanding of diplomacy.

That the world is more troubled than at any time since the end of the ‘cold-war’ is hardly in doubt but with a US president hell bent of putting America first and tearing up established trade rules never in peacetime was there a greater need for European leaders to stand together and fight to save rules based order. What a pity it is then that rather than find itself speaking as one against new found adversity Europe appears more content to tear itself apart.

In my ongoing musings I frequently find myself drawn to read and listen to views of older, wiser heads from an earlier generation but who are still with us. Cynics may prefer to call these people ‘Yesterday’s Men’ but in the troubled world that we live in there is no harm listening and maybe learning from former politicians and statesmen who have been there before. I will concentrate my today on former US Secretary of State, Henry Kissinger.

Whilst I was no fan of Richard Nixon, I make no apology for holding Henry Kissinger in somewhat high regard.

Edward Luce in a recent Financial Times interview referred to Henry Kissinger as being co-architect of cold war rapprochement with China and also of détente with the now former Soviet Union. Politely refusing to be drawn that much on the subject of Donald Trump, other than to suggest that the Helsinki summit was one that had to take place and that it was one that he himself had advocated, I found it particularly interesting that in talking about Russia’s “almost mystical tolerance for suffering” Kissinger implied that “the west wrongly assumed in the years before Putin annexed Crimea that Russia would adopt the west’s rules-based order”.

In the interview article Kissinger went on to suggest that “NATO misread Russia’s deep-seated craving for respect” and that the mistake it made “is to think that there is a sort of historic evolution that will march across Eurasia and not to understand that somewhere on that march it will encounter something very different to a Westphalian [western idea of a state] entity”.

Such views echo some of those that I have previously made in ‘commentary’ in respect of, Russia after all having been invade twice over the past one hundred years by Germany, our continually underestimating Russian fears of the potential for western aggression.

What little Kissinger did say on Donald Trump was poignant – “I think Trump may be one of those figures in history who appears from time to time to mark the end of an era and to force it to give up its old pretences. It doesn’t necessarily mean that he knows this, or that he is considering any great alternative. It could just be an accident.”

Henry Kissinger had long been a huge fan of Margaret Thatcher and in the Luce interview he spoke of her as being “a magnificent partner” adding that “I am a believer in the special relationship because I think America needs a psychological balance and this is a natural one based on history — not just on contributions.”.

He also spoke in the interview of Margaret Thatcher’s first Foreign Secretary, Lord Carrington who died at the age of 99 a week ago and who had himself resigned in 1982 much to the surprise and disdain of the PM over the Falkland crisis.

Peter Carrington later went on to become NATO Secretary General and to the best of my knowledge, never said a bad word about his former Prime Minister. He never regretted resigning as Foreign Secretary and I myself will always remember him with great pleasure as someone who always presented himself as having been very fortunate. To that end, in a BBC interview Carrington went further saying that he believed that what he did [by resigning] placed the then Mrs Thatcher in a very much stronger position and di her the power of good”. Like Kissinger, Peter Carrington believed very firmly in the power of diplomacy just as he also did of common sense.

In the Luce interview Kissinger says that Carrington had said ‘What is the point of assuming responsibility if you then whisper to your friends that you are not really responsible?’

As said, I have long admired Henry Kissinger and while we have never actually met, we have shared occasionally correspondence. Indeed, on reading his quite excellent book ‘Diplomacy’ in 1996, I note that in a long ago ‘commentary’ I said that Kissinger had ‘usefully challenged some theories that had dominated the post war years and that he had placed at our disposal a fine translation of the Wilsonian theme and that, to the eyes of the overseas reader nearly eighty years after the original thesis, a continuous reappraisal and reminder of the necessarily difficult decisions which the US will continually face in carrying the burden of peace without domination’.

Amongst a wide range of successful and failed diplomacy the book ‘Diplomacy’ which was published by Simon & Schuster contains observations on selected speeches and essays in regard of foreign policy success and failure and makes very interesting observations in respect of what is titled, ‘The Troubled Partnership: A Reappraisal of the Atlantic Alliance’. It remains to me a book that, because of its honesty and self-criticism, needs to be read.

The above are just views of course but in a world where diplomacy, understanding and leadership are all in short supply, worth listening to none the less?.