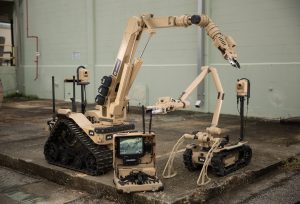 In today’s ever-evolving battlespace, missions are becoming increasingly complex. Intensive, complicated, and time-consuming, they place a heavy burden on military personnel and often put them in considerable danger. Whether it’s hazardous materials clean-up, chemical, biological, radiological, nuclear and explosives (CBRNE) detection, or explosive ordnance disposal (EOD), the risk to service people is constantly growing as they continue to put their lives on the line to make the world a safer place.

For years, robots have played a crucial role in ensuring personnel stay protected during these challenging missions, enabling them to respond to threats more quickly and effectively while keeping out of harm’s way. With new threats emerging almost every day, it’s essential to ensure the robotic systems you’re investing in are advanced, agile, reliable, and ready for anything.

L3Harris Technologies understands just how critical the role of robots can be. Its growing family of robotic systems currently consists of the T7™, a large, multi-mission robot that is revolutionising robotic control, and the T4™, the world’s most capable medium-sized robot. Both were designed to address the demanding requirements of commercial and military missions in challenging environments.

The T7 is setting the standard for large robots

The T7 is redefining cutting-edge robotics, thanks to its extraordinarily immersive dynamic force feedback and intuitive control capabilities. Strong, highly dextrous, and powerful, the T7 makes light work of burdensome tasks. Built specifically to help overcome the challenges identified by hundreds of users, it provides impressive manipulation precision and dexterity for an unparalleled operational experience.

Extremely robust, the T7 can withstand heavy-duty usage, avoiding sizeable replacement costs and reducing the need for repairs. Hardened against electromagnetic interference (EMI) due to its aerospace-grade design, the robot is also optimised to operate alongside powerful electronic countermeasures (ECM) without disruption. Purpose-built for outstanding performance and ease of use, the T7 enables personnel to achieve the previously unachievable. 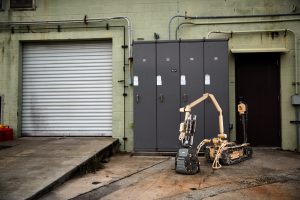 L3Harris’ T4 robot offers large robot capabilities in a medium-sized package. Weighing in at just over 100kg, the T4 outperforms all other medium-sized robots, as well as many large ones. It can be transported with ease and rapidly broken down into subsystems to be carried by two people. The T4 robot’s best-in-class manipulator reach and superior strength set it apart from others in its weight class, enabling it to perform tasks previously beyond the scope of a medium robot.

Moreover, the T4 is able to fire the highest power EOD disruptors of any medium-sized robot, such as HOTROD and PIGSTICK. Its patented recoil-absorbing system reduces recoil forces to its arm by an astounding 90%, allowing it to fire repeatedly with maximum disruptive effect and no robot damage. Like its larger predecessor, the T4 is also hardened against electromagnetic interference (EMI), so it has no issue operating alongside ECM. This incredibly capable robot is changing the game for medium-sized robotic systems. 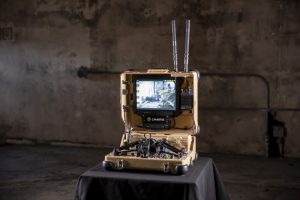 While both robots have significant strengths individually, they are also built as a family of systems to help streamline operations, maximise skills retention, and reduce through-life support and maintenance costs. The L3Harris family of robotic systems shares many exciting advantages:

The most important of the features the T7 and T4 share is a unique haptic feedback controller that’s compatible with both systems. Unlike other robotic controllers that use simple joysticks or game controllers, this haptic controller allows the user to move their hand and have the robot mimic their movement.  Moreover, the control interface is motorized and can push on the user’s hand, allowing the operator to physically “feel” what its robot arm is feeling due to tactile force sensors in the gripper fingers, enabling mission-critical precision and human-like dexterity during complex tasks. 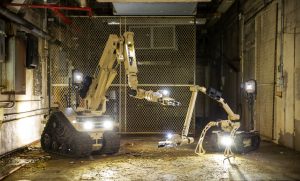 An intelligent user interface enables rapid completion of demanding and intricate jobs, such as unzipping bags and opening small compartments like glove boxes, maximising mission effectiveness and significantly reducing task completion time. The advantages of the L3Harris haptic control system have been independently verified by the US Army Research Laboratory (ARL) in human factors testing, concluding “100% of the users indicating it either somewhat improved or greatly improved their overall mission performance,” leading to 20% reduction in task completion time and operator workload. 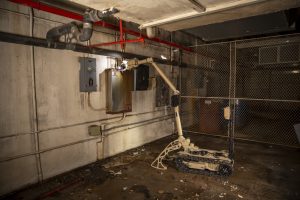 The environments in which missions are conducted across the battlespace can vary widely. Certain missions may be better suited to a certain size of robot or certain capabilities, which might require the procurement of both large and medium-sized robots to ensure as many bases are covered as possible. The issue this presents is that often these robots are procured from different vendors, or else do not share any of the same features or capabilities, meaning training takes up more time than it should and skills retention across systems is made that much harder. Likewise, having to switch between multiple controllers and interfaces during missions is less than ideal in a world where every second counts.

That’s why L3Harris designed a family of robotic systems. As the T4 was built on the foundations of the T7, the robots share many of the same features and capabilities. As a result, operation across systems is streamlined, cognitive burden is dramatically reduced, and any required training is minimised. Operators can even switch between the robots using a single controller, meaning both systems can be used simultaneously for integrated missions. Due to the many common parts and interfaces they share, deployment, support, and repair of the robots is made that much simpler too. This commonality across systems also means any associated costs are massively reduced. 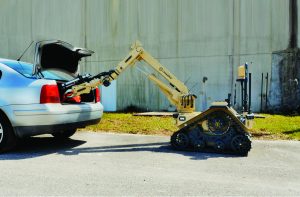 The unpredictable nature of the battlespace demands agility and adaptability in the face of changing threats. L3Harris’ robotic systems are rapidly reconfigurable to readily meet mission requirements as they evolve. Multiple mission-specific attachments, sensors, payloads, tools, and easy-to-use payload interfaces mean the T7 and T4 are ready for almost anything. The robots are also easily upgradable to ensure they’re always performing at their optimum, extending service life and reducing through-life costs.

Extremely manoeuvrable thanks to an all-terrain, all-weather track system, L3Harris robots provide uncompromised performance all of the time. What’s more, a ruggedized design ensures they thrive in even the harshest of environments, so whether faced with sand, snow, mud, staircases, or water, they’re never deterred from completing the task at hand.

In service and saving lives 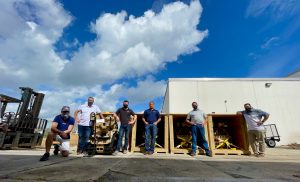 L3Harris robotic systems are often called upon to complete dangerous tasks to keep soldiers protected. In fact, earlier this year, L3Harris delivered its 122nd T7 robot to the UK Ministry of Defence (MoD) for its STARTER program to replace their aging existing fleet of EOD unmanned ground vehicles (UGVs). These T7 robots are now being deployed for missions both within the UK and abroad.

L3Harris’ family of robotic systems is on display at this year’s Defence and Security Equipment International (DSEI) event in London from 14 – 17 September 2021. To get up close and personal with these robots and understand more about how they save lives, reduce the cognitive burden, and offer unmatched performance and control for complex missions, visit L3Harris on Stand H5-310.

Discover more about our family of robotic systems by visiting l3harris.com/robotics