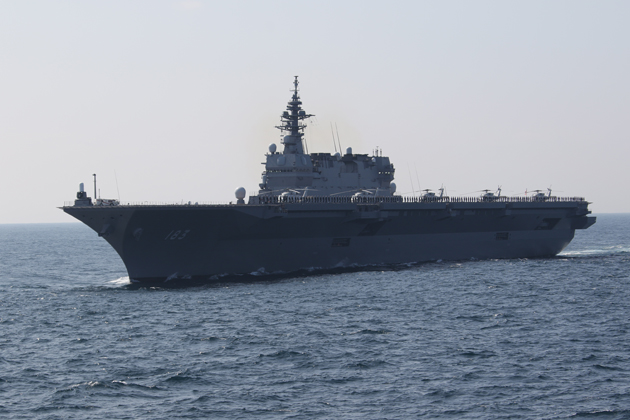 12 Feb 17. The Trump administration’s first defence secretary, retired general James Mattis, confirmed on 3 February in Tokyo that Article Five of the Treaty of Mutual Cooperation and Security between Japan and the US applied to the Senkaku Islands.

The announcement did not please China, which declared the US must respect its ‘ancient’ territorial claim to the island. China has been quick to unfurl timeworn maps going back centuries marking the islands in some fashion.

The announcement was a much-needed clarification of the mutual defence treaty. In 2009, when the Senkakus issue heated up, US diplomats had no idea if the Senkakus came under the protection of the defence treaty, said Grant Newsham, a senior research fellow at the Japan Forum for Strategic Studies in Tokyo.

Though Article Five calls upon the US to assist Japan to ‘act to meet the common danger in accordance with its constitutional provisions and processes,’ Newsham, a retired USMC colonel, said, the Japanese believe the defence treaty includes all parts of Japanese territory, but Article Five’s wording in fact requires neither side to do much of anything.

‘The perceived meaning on the Japanese side is that the US will jump right in and protect Japan – from all threats; and the Chinese grabbing or attempting to elbow out the Japanese from Japan’s territory is indeed something the Japanese expect help with.’

Ching Chang, research fellow of the Taipei-based Society for Strategic Studies, said that there is too much suspicion in Tokyo over America’s commitment and interpretation of Article Five. ‘If there is no suspicion, you generally never ask your counterpart to repeat his commitment again and again,’ he said, citing the Obama administration’s 2014 assurance that the Senkakus were to be treated as Japanese territory.

Unless it wishes to end the US-Japan relationship, Newsham said, then the US must be involved. ‘Withhold full support or stand on the sidelines and call for negotiations, and the Japanese will go ballistic,’ he said.

The US government has never understood how important the Senkakus are to Japan. ‘Sure, they may just be ‘some rocks’ – but consider what would happen if Mexico took a square yard of Texas.’ Newsham said there is something visceral about a country’s territory that makes people willing to fight – ‘far beyond any actual financial or other intrinsic value.’

This is equally true for China. Beijing, which claims them as the Diaoyu Islands, lost them to Tokyo after a humiliating defeat during the 1895 Sino-Japanese War. Now, over 120 years later, it looks like another war is what it will take to satisfy Beijing’s obsession over the islands.

The danger of China and Japan fighting is the risk of escalation that could include the US in a nasty battle few Americans would understand, let alone find the rocks on a map. Newsham said he was shocked in 2009 over how many US diplomats in Tokyo did not know where the islands were located.

Retired Lt Gen Wallace ‘Chip’ Gregson, who served as the Assistant Secretary of Defence, Asian and Pacific Security Affairs from 2009-11 under the Obama administration, said a Chinese invasion of the islands would be a ‘catastrophe’ and cited other surprises of history as examples. ‘One never knows. Who thought the Brits would have to mount a force to retake the Falkland Islands? Who – other than Maggie Thatcher – thought they could?’

There have been numerous non-military scenarios of China taking the islands by force. One involves fishermen occupying the islands and refusing extradition. This scenario often assumes that the Chinese military planned and supported the occupation sub rosa and was prepared to protect its citizens by force should Japan attempt to remove them.

Another scenario involves an attempt by the China Coast Guard to patrol the islands and declare them off-limits to Japanese ships. This might include the placement of a flag, landmark and possibly a small unarmed coast guard garrison.

‘A proxy force of Chinese fishing fleets, maritime militia and China Coast Guard forces could all be used,’ said retired US Navy captain James Fanell, former director of intelligence and information operations at US Pacific Fleet. ‘While not a direct threat to US forces, because these ships would not be considered warships, the US Navy would not be able to fire on them.’

So far, Japan has handled challenges by China at a professional level, said Gregson, who served as commanding general of Marine Corps Forces Pacific and Marine Corps Forces Central Command from 2003-05. This includes intrusions into Japanese territorial waters from both Russian and Chinese military aircraft. ‘This is a large and continuing challenge to Japanese sovereignty, with numbers of intrusions reaching high Cold War levels,’ he said.

‘China’s growing maritime militia and their vast fishing fleet – much of it state-sponsored and armed – is perhaps a greater worry.’ Japan certainly can put law enforcement officials, coast guard and military forces on the island, and the situation contributes in a significant way to Japan’s defence decisions since 2011 to increase their security capabilities. Those capabilities, including the development of an air-land-sea amphibious task force, will continue to grow, he said.

Gregson’s concern is that asymmetric efforts such as the tactic of flooding the zone with maritime militia or ‘little blue men’ looks designed to do the same thing that is occurring in eastern Ukraine by Russian forces.

A darker scenario involves a military occupation of the island by Chinese marines and navy. This would include placement of armaments on the island that might include air defence and anti-ship missile batteries, including a helicopter landing pad, command-and-control facilities, barracks, radar and signal intelligence facilities, and an artificial port.

Chinese fighters and patrol aircraft would patrol the skies to enforce China’s 2013 air defence identification zone (ADIZ) over the East China Sea. Since the declaration of China’s ADIZ, it has already increased the number of sorties by fighter aircraft and maritime patrol aircraft, including increased patrols by coast guard and naval vessels.

Should blood be spilt over the islands, China has various tools of engagement, Fanell said. First, China could launch ballistic missile strikes against Japanese land-based targets, including US military facilities in Japan, ‘from the Ryukyus up to bases on Honshu like Yokosuka and Yokota’.

In addition to ballistic strikes, China could launch anti-ship cruise missile strikes and anti-ship ballistic missiles (ASBM) against both Japanese and US naval forces. China now has two ASBMs: the DF-21D and DF-26. Fanell said these could be used ‘against US naval forces that are forward deployed in the region…those from both the 7th and 3rd Fleets.’ Chinese special operations forces could conduct surprise operations against Japanese and US air bases.

A dark contingency could be a joint anti-air raid campaign (JAARC). Chinese military doctrine mandates that any attack against an offshore island include a JAARC, he said. In the case of the Senkaku Islands, a JAARC response by the Chinese air force and navy fighters ‘would seek to destroy all enemy airpower that would be used to prevent Chinese amphibious forces from conducting their invasion’.

The initial invasion would be a ‘short, sharp war’ by China, Fanell said. Therefore, the US-Japan team must be prepared to conduct a counter-invasion as soon as possible. Given the current state of Japanese amphibious lift, it will require a combined lift effort with the USMC and other joint support from the US Pacific Command.

A counter-invasion might be avoided, though, Newsham said, citing that the islands are tiny and all one needs to clear them are a ‘couple of F-18s and fuel-air explosives.’ However, the area would have to be closed off permanently from Chinese intrusions, whether military, coast guard or fishing vessels, and that would require a combination of submarines, surface combatants and air support, all of which Japan has in its inventory.

Though Newsham admits Japan’s amphibious capabilities are weak, it could land a small number of troops on the islands, minus any shooting from China, and establish a small garrison.

Newsham argues that it is important not to focus exclusively on the Senkakus, where amphibious forces are not so essential, and instead should consider the entire Ryukyu chain, which China said belongs to it.

The bigger islands in the chain – Ishigaki, Miyako, Yonaguni and others – offer far more opportunities to employ amphibious forces to either occupy them to forestall Chinese landings and operate anti-ship, anti-air and surveillance systems, or to retake the islands if necessary. ‘The Americans and Japanese might also use the firing ranges down near the Senkakus – but which the US hasn’t utilised since the Carter era.’

Japan has made considerable progress towards developing an amphibious force over the last five years or so, especially considering they went from a standing start, Newsham said. Japan has a basic capability to conduct amphibious operations, but it would have a hard time against an opponent that was shooting back. Japan’s military has particular weakness with command and control, inter-service communications, and fire support coordination and capabilities.

Newsham said the Japanese military has not done enough practice at amphibious operations and lacks a joint headquarters or command structure for conducting such operations. ‘We’ve been suggesting Japan establish a standing/permanent ‘Joint Task Force – Nansei Shoto’ with the mission of defending the southern islands,’ he said.

To defend the Senkakus and the rest of the Nansei Shoto, amphibious forces are just one piece of the puzzle, Newsham noted. ‘You also need proper types and numbers of warships and submarines, aircraft, missile and air defence and anti-submarine systems, and anti-ship missile batteries.’

He warned that time is against Japan as the Chinese military modernisation effort trends in their favour. ‘Within a matter of years, the Japanese military could find itself outnumbered in all areas and find itself ‘swarmed.’ By itself, Japan’s prospects are not good. With the US involved, however, Japanese chances improve considerably.’

In the long run, Japan needs to speed up efforts to establish small bases on a number of the Nansei Shoto islands – ‘and they’ll do well to at least rotate US units through.’