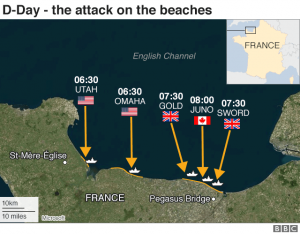 It is very fitting that at long last there should now be a permanent memorial to honour fallen British servicemen who gave their lives 77 years ago on the beaches of Normandy in order that Europe could be free. Opened yesterday on the anniversary of the D-Day landings, the British Normandy Memorial is a tremendous achievement and one that will act to remind all who visit it of the 160,000 allied troops from Britain, the USA, Canada, France and other allied nations who on the 6th of June 1944 began the battle to liberate France and the rest of Europe from Nazi tyranny.

With the names of 22,442 soldiers under British command who died during the Normandy campaign engraved in stone the memorial stands as a permanent reminder of their personal sacrifice to rid the world of tyranny. Sitting atop a hillside overlooking Gold Beach, one of three where British soldiers landed in France that morning, the British Normandy Memorial unveiled yesterday is set in Ver-sur-Mer, a 50 acres site that overlooks the coast off Arromanches-les-Bains and the remains of Mulberry harbour.

Using words very befitting of the occasion, French armies minister, Florence Parly said that “We know what we owe the soldiers of liberty. Today we pay homage to the British, France will never forget. France is for ever grateful”

The site consists of a temple-like structure containing 160 stone columns inscribed with the names of the dead together with a bronze sculpture depicting three charging infantrymen by British sculptor David Williams-Ellis and a wall featuring the names of those who were killed on D-Day itself. There is also a monument dedicated to the memory of French civilians who died during the period.

With this in mind and observing the lone piper who played at the memorial at sunrise yesterday it is regrettable that the Ministry of Defence has decided that rather than manufacture of military sporrans for the Royal Regiment of Scotland will apparently now be imported from Pakistan as opposed to being made in Scotland. MOD requirements for sporrans, kilts and other traditional national costume uniform may be very small in the great scheme of things but that these should always be manufactured in the UK and preferable in the case of the Scottish Regiment, in Scotland should go without saying.

Sadly, if the story that foreign imitations made out of what someone described as “being made of plastic and allegedly held together with glue “ is true I sincerely trust that the MOD will think again and reverse this appalling error of judgment that could ruin a very small Scottish industry and one that has already been placed on the ‘red list’ of endangered crafts by the Heritage Crafts Association.

This is so typical of the MOD that we have today. They talk of their support for sovereign capability and yet the reality is that they couldn’t care less. Yes, money is extremely important but so too is pride.

I know very little about the Scottish sporran and kilt making industry but I do know of the handful of remaining British companies such as Toye, Kenning & Spencer based in Bedworth and who for generations have been regarded as being home of quality insignia and regalia manufacturing including orders of the knighthood and so much more.

Are companies such as these who have harnessed skills honed over three centuries and ten generations of the Toye family in the Birmingham jewellery quarter and that have kept specialist traditions going next on the list to be replaced with imported rubbish? Will the next CBE, OBE, MBE medals that the Queen or other members of the Royal Family present to those being awarded be manufactured in Pakistan or China?