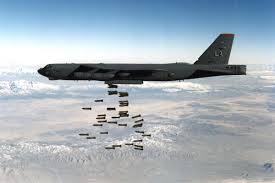 A huge and vital piece of US military bombing capability, an aircraft that first flew as long ago as 1952 and one that, fitted with new engines, the US Air Force plan to retain in service until at least 2050, suffice to say that there is no aircraft anywhere in the world that compares to the size and capability provided by the B-52 Stratofortress. Recognised and feared in equal measure by adversaries and still doing the job that it was designed to do as well today as it was when it first entered service with the Air Force in 1955, this magnificent and extremely powerful military aircraft capability is now to be re-engined.

With eight engines on each B-52 aircraft, 58 in active operational service plus an additional 18 held in reserve and 12 in long-term storage, re-engining the B-52 Stratofortress is a very big deal to win. Inclusive of support through the encompassed 2021 to 2035 period envisaged, the USAF plan is based on a requirement for 608 new engines plus spares and that could take the number of new engines eventually being required to around 650.

Following issue of an RFP (request for proposal) earlier this year Rolls-Royce has now submitted its formal proposal based on the well proven F130, an engine that produces 17,000 pounds of thrust and that is already powering E-11A and C-37 aircraft in service with the US Air Force.

Built in the US at the ultra-modern advanced manufacturing Rolls-Royce plant in Indianapolis, the Rolls-Royce F130 is considered to be a perfect fit for the B-52 re-engine requirement. Powerful, affordable, efficient and already well proven in service, the F130 engine is a variant of the hugely successful Rolls-Royce BR725 commercial aircraft engine – a family of engines that have already achieved more than 27 million in-service flight hours in a range of civil and military aircraft.

Rolls-Royce has a long and very successful history in the US of manufacturing engines for various USAF military aircraft and naval propulsion systems and suffice to say here that US built Rolls-Royce engine technology powers aircraft and ships in-service in all branches of the US military including the Navy, Marines, Army and Coast Guard.

Examples are many and include the hugely successful Lockheed Martin C-130J transport aircraft, the CV-22 Osprey and Global Hawk unmanned aerial vehicle. Rolls-Royce North America maintains complete design, engineering, manufacturing and test operations in the USA. The relationship goes back over many decades and the company continues to conduct advanced technology research for the US Department of Defense, NASA and other customers.

Since 2013 Rolls-Royce North America has invested close to $1 billion in research and development in-country and it is worth noting that a $600 million investment in modernisation and technology programs is now nearing completion at the company’s largest US engineering, design, and manufacturing facility in Indianapolis.

The latter investment includes state-of-the-art advanced manufacturing at the Indianapolis facility, all of which paves the way for the optimised F130 engine production that would be required on the B-52 engine replacement program if Rolls-Royce win. Importantly, Rolls-Royce has said that if it wins the B-52 re-engine competition it will add more than 150 new manufacturing, engineering, program management and similar jobs at Indianapolis.

Rolls-Royce North America is already providing in excess of 500 military engines every year to the US Department of Defense. Employing around 6,000 personnel in 27 states spread right across the USA from southern California to Walpole Massachusetts, Rolls-Royce is a long established, important and highly respected employer in the US, one that supports an estimated 52,000 jobs across the nation and adds close to $9 billion to the economy each year

The relationship with the predecessor Indianapolis based Rolls-Royce North America Company (Allison) stretches back all the way to 1915 and most notably, the Indianapolis facility produced large numbers of Rolls-Royce Merlin engines during World War 2.

Rolls-Royce North America has its own board of directors led by President and CEO Tom Bell and who is also Rolls-Royce President of Defence. Importantly, the company has for many decades successfully operated in the US under what are known as US Special Security Agreements. Very worthy of note in this particular regard is that the Department of Defense has recently recognized Rolls-Royce North America with the prestigious Cogswell Award for industrial security excellence.

The F130 engine being offered by Rolls-Royce North America (Defense) is a highly reliable and proven engine operating on USAF aircraft and already in commercial production. One of the specific USAF requirements is to have an engine on the B-52 that can reduce both fuel burn and maintenance requirement. The ability to make faster diagnoses of problems on modern engine technology, reduce overall maintenance requirement time and make what repairs might be necessary faster are no doubt important factors behind the USAF requirement for new engines.

The B-52 Stratofortress is unique not only in respect of service longevity and size but also in having a total of 8 engines on wing. The F130 option being put forward by Rolls-Royce is far more fuel efficient than the existing engines and will provide USAF not only with much improved fuel economy but also improved range and reduction in air-to-air refuelling requirements. It is in my view a perfect fit in terms of size, thrust, increased efficiency, reliability and in cost of operation.

Rolls-Royce clearly have an excellent product in the proven F130 engine design and they are I am sure right to believe that this engine is a perfect fit for the B-52 re-engining program. With over 27 million flight hours already achieved by the BR700 family of engines from which family of engine the F130 is derived combined with the already proven in-service reliability and efficiency of the F130 in USAF service is clearly advantageous providing as it also does, an affordable option for the B-52 re-engine program and one that also provides low technical and integration risks.

A final award of the B-52 re-engine competition is anticipated in the second half of 2021.