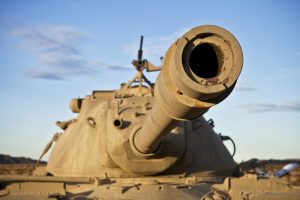 From the outside, the turret system on a ground vehicle may appear a straightforward mechanism: The turret resides on the top of the vehicle, and rotates as needed, while raising and lowering the gun barrel when required.  Hidden from view, though, is a highly precise and complex system that integrates several key mechanical and computational subsystems that are either supplied by the platform’s manufacturer or from a number of different, highly specialized vendors. What drives the rotational movement of the turret is the turret aiming and stabilization drive system (for an example, see Curtiss-Wright’s Turret Drive Stabilization System [TDSS]). Other key elements of a turret system include the sighting system and the fire control system. All of these subsystems must be integrated together so that the information from the sighting system, which locates the target of interest, can be used to accurately position the turret via the stabilization drive system, thus enabling the firing system to engage the target. All of these functions must occur as close to real-time as possible, with great precision, often while the vehicle is moving at full speed over rugged terrain.

The complexity of the turret system makes the quality of the engineering behind the gun turret drive stabilization system essential since it must have the capability to precisely position the heavy armored turret and keep the ground vehicle’s weapon precisely aligned on the target while under conditions of great shock and vibration, all while the platform travels at high speed. Because the subsystem components are often provided by a variety of different suppliers, the linkage, or interfaces, between these critical components are very important for the optimal, efficient performance of the overall turret system. During the vehicle design stage, how these subsystems communicate and interact must be defined in the interface documents. For example, these documents will define the interfaces for the turret aiming and stabilization drive system’s mechanical and electrical components, while also defining where the boxes that house these functions will be located within the turret’s limited interior space. The system’s electrical interfaces, such as the bus systems and latencies, must be clearly defined down to the lowest level. 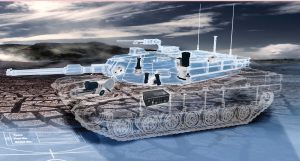 Adding to these design issues is the constant drive from system designers to provide smaller and lighter solutions so that new capabilities can be introduced into an already space-limited platform. At the same time, these solutions must be extremely rugged and robust. To say the least, these sets of goals are often at odds with each other. These issues are only exacerbated when the turret drive stabilization system is a bespoke solution. The use of modular open systems approach (MOSA) designs reduces both the complexity and costs of these solutions.

Complex, precise systems such as those used in a turret drive system require robust control loop systems. One major challenge facing turret system designers is to ensure the signal quality of the various subsystems, especially when the subsystems are sourced from multiple vendors. For example, if one of the subsystems creates signal noises on an electrical bus, the improper signal values can interfere with the control loops of another subsystem. These problems are typically discovered during the confirmation process of a new ground vehicle. In theory it is possible that low quality signals from any subsystem can or will be amplified by the control loops, and the turret drive system motors will translate this noise into unwanted movement.

It’s critical to ensure that no subsystem negatively affects the performance of another. While project documentation will specify electrical signal range, it doesn’t typically specify signal quality. There is an inherent assumption that the signal quality from one vendor will be appropriate and not interfere with another subsystem. That means that integration problems of this type aren’t typically discovered until the platform is tested in a system integration laboratory. Subsystem suppliers need to be forthcoming in characterizing and providing accurate information about their own solution’s electrical characteristics to the platform manufacturer and other contributing vendors. This will ensure that all suppliers are informed what types of noise, if any, will be introduced into the platform and the system.

Another important step for turret system programs is for the platform manufacturer to involve all subsystem suppliers in the design process at the very beginning of the project. Subsystem suppliers should also be involved during the first joint test of a new turret. Simulation and testing should also take place at the earliest possible stages of design and development. Unfortunately, simulation remains a theoretical mode and requires a perfect model of each component in order to produce accurate identification of the source of any unwanted signal noise.

Another critical phase of turret design takes place when the turret is “married” to the vehicle, enabling the first real-world tests of the platform to commence. It’s at this point that additional complexities will come into play as numerous unique characteristics of the vehicle emerge, such as those related to its behavior while moving, or the vehicle’s unique vibration performance, which differs greatly on wheeled and tracked vehicles. The functional safety of the system is another area of complexity and must be guaranteed in accordance with standards such as DIN EN 61508, for example.

Finally, the commissioning process remains the most important step, as it is during this stage when all the subsystems are actually working together, so faults can be discovered and troubleshooting can take place to isolate any system or subsystems causing a problem. For example, it is at this phase that Curtiss-Wright’s embedded TDSS software suite is fine-tuned and configured to the overall system via parameter settings. Because of its importance, the commissioning process should happen as early as possible.

So, the next time you see a turret, it’s worth thinking “beneath the armor” to consider the amount of precision engineering and complexity involved in moving, controlling and firing the weapon. What looks simple on the outside requires close cooperation between the platform integrator and multiple suppliers, each needing to share accurate information and working together to ensure that the whole solution is greater than the sum of the subsystems. Our warfighters depend on it.