Spectra Group is a specialist provider of secure voice, data and satellite communications systems and is the UK distributor for US company Comtech Systems Inc of Troposcatter systems including the new Compact Over-the horizon Mobile Expeditionary Terminal (COMET) system.

The COMET system has recently been purchased by the UK Royal Navy for primary use by the Royal Marines Future Commando Force, and because the contract has been placed through the NATO Support and Procurement Agency (NSPA), Troposcatter COMET is now available to all NATO countries for the next 3 years via the NATO catalogue.

Tropospheric scatter uses the Troposphere (up to about 13km altitude) to provide communications. Spectra Group supply two systems; the much larger, but more powerful 500-Watt Mobile Transportable Transmission Systems (MTTS) capable of delivering 210Mbps of data throughput up to ranges of 250km dependent on conditions, and the COMET which is smaller and more lightweight.  COMET has a maximum transmit power of 10-watts, using a 1-meter dish and is designed to provide low latency (typically 9-20mS), large data rates (originally up to 60Mbps) and ranges up to 70 kilometers. However, COMET often far exceeds the designed data rate and, with careful siting, can exceed the specified range.

Critically, Troposcatter is satellite independent and works in a GPS/GNSS denied environment, so is suitable for use in a Peer-on-Peer conflict/Multi Domain Integration. The low latency, large bandwidth, enables analysis and manipulation of large data, which combined with its low operating cost makes it suitable for deployed battlegroup or even company headquarters.  Unlike geostationary satellites, it is also effective in polar regions.  As a point-to-point system, it is very directional, requires low power and uses complex waveforms so is difficult to detect and is highly suitable for many of the challenges UK Defence and NATO face today.

The core MTTS Modem (CS67PLUS) is common across the troposcatter family of systems and is the first software-defined adaptive troposcatter modem and radio packaged in a compact sealed module.  This adaptive architecture can support Line- of-sight (LOS), Obstructed LOS and Troposcatter beyond line-of-sight (BLOS) communications with a capacity of < 210 Mbps of full duplex data throughput. 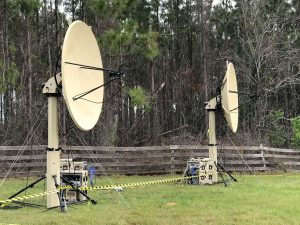 Transit Case Modularity
The modular design allows users to take a building block approach to deployment, only utilising the cases needed for a specific mission objective, with the ability to increase the power of the systems as those requirements change. The Radio Baseband Transit Case (paired with a C-Band antenna) can function as a stand-alone line-of-sight transmission system for shorter range and unobstructed links. The addition of a single RF section enables dual diversity troposcatter and diffraction links for medium range and obstructed communications. A second RF section (with antenna) provides Quad Diversity troposcatter communications for maximum range.

The portable transit case design allows more flexible deployment options than traditional trailer or vehicle based troposcatter systems. The MTTS cases can be transported to areas that are inaccessible by vehicles to optimize transmission paths. Spectra Group offers a 2.4 m troposcatter antenna solution, but the MTTS is compatible with any C-band antenna.

The COMET uses the same CS67Plus modem as the MTTS but is a much smaller and more lightweight system. It is designed to support rapid, mobile operations that require high bandwidth and ranges up to 70km.

The COMET system uses a 1-metre dish and the COMTECH CS67Plus Modem capable of up to 210Mbps, which takes the IP stream and directly converts to two RF outputs in the range 4.4-5Ghz to provide two frequencies, amplified by Dual 10W GaN amps (Dual LNA on the receive path). This allows for dual frequency/polarisation diversity that compensates for any fading/multi path.

In suitable conditions, the bandwidth, range, and data transfer speeds can be much greater than predicted. 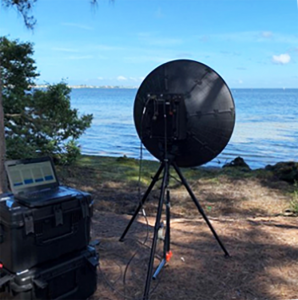 The COMET system is simple, intuitive, and easy to set up and does not require the use of vulnerable and expensive satellites. It is portable and can be established and operational within 15 minutes. The COMET system comes packed in two small, commercial airline checkable cases (<27kg each).

COMTECH have developed a very robust, optional, Direct Sequence Spread Spectrum (DSSS) Waveform which spreads the signal over the available signal bandwidth to improve link reliability on harsh links with low signal levels and to reduce the probability of detection. The spreading technique sends data over a wider bandwidth to be received at signals below the noise floor.

Recent tests with a Commercial off the Shelf (COTS) Active Electronically Steered Array (AESA) Antenna achieved 112km with only 4Watts to a mobile maritime platform. The same configuration could be used to enable static links – to be established in seconds – if mounted on a Mechanised Infantry Vehicle (MIV) such as BOXER. Teamed with Mobile Ad Hoc Network (MANET) Radio, or another innovative IP bearer, could enable Low Probability of Intercept/ Low Probability of Detect (LPI/LPD) high bandwidth data right to the tactical edge to enable the MOD vision of a Digital Backbone to multiple command and communication nodes or even tactical observation posts.

This collaboration sits well with Spectra’s ethos of innovation.  Spectra’s own revolutionary Slingshot technology has been a true game-changer in the world of tactical communications.  SlingShot is a unique system that enables UHF and VHF radios to use L-Band Satellite frequency, allowing users to instantly extend the range of their in-service tactical communications equipment to Beyond Line of Sight (BLOS).  Conceived and designed to meet demanding Special Forces requirements, SlingShot offers a significant number of benefits for users requiring secure, reliable and robust communications on the move (COTM).  Over 3500 SlingShot systems are in operation world-wide in the manpack, vehicle, maritime and aviation variants.

Simon Davies, CEO of Spectra Group said: “We are delighted to have been awarded the contract to supply Troposcatter services through the NSPA catalogue which will enable us, in addition to wider NATO forces, to supply and support the UK MoD and the Royal Marines – who have urgent operational requirements – and are likely to be the early adopters of this deployable long range communication capability.  We have participated in the British Army’s Warfighting Experiments in the past to better understand the challenges and requirements that future combat forces require and have been working hard with our partner COMTECH to deliver these essential capabilities.”