The US Navy’s mothballing of their Railgun isn’t the end of the story.

It’s taken the US Navy over half a billion dollars of funding to conclude the Electro-Magnetic-Rail-Gun (EMRG) technology they have been developing for more than fifteen years is presently incapable of being operationalised.

Released May 28, 2021, the US Navy’s proposed Fiscal Year 2022 budget reveals that no funding will be available to continue this project. In part it is also clear that no funding was requested by the US Navy. This supports the theory that the technological approach being taken by the teams involved in development of the US Railgun capability has plateaued prior to meeting required operational parameters. Parameters which include system durability, size, range, and power consumption. Hence the project is being mothballed and hence the raft of articles proclaiming the death of the US EMRG.

However, efforts to develop an operational EMRG for defence applications continue globally. Europe, India, Russia, Japan, Turkey, and of course China (who are perhaps leading the EMRG race) all continue to talk of their own Railgun developments.

This clarifies that the requirement for a weapon technology that can deliver the capabilities that an EMRG can has not gone away – namely non-explosive projectiles that can be accelerated to hypersonic velocities with a range well in excess of 100 nautical miles. Whilst the US Navy highlights they will instead be “improving offensive and defensive capabilities such as directed energy, hypersonic missiles and electronic warfare systems” as well as the Hyper Velocity Projectile (HVP – a spin off from the US Railgun development) it is safe to assume they would return to the Railgun race should a step-change in technology become feasible that overcame their present system limitations.

For a novel weapon system to be deemed suitable to enter a long-term, funded, operational lifecycle it must satisfy numerous requirements. It should be deployable upon multiple platforms, preferably across multiple domains (sea, land, air, space). At present the US Navy’s Railgun could only be deployed upon one US Navy platform, the Zumwalt Stealth Destroyer, of which there will only be 3. This is due to the large amount of electrical power required to fire the US Navy’s Railgun and, in part, due to the large form footprint the US Railgun needs.

Furthermore, for a developmental weapon system to be considered viable it must deliver a suitably long operational life.  Reports vary but it is likely that US Navy’s Railgun needs a replacement barrel at least every 400 shots, due to the considerable internally destructive forces created by each firing. As a comparison the required barrel life of a 155mm howitzer is in the low thousands. There are other challenges that are known to remain unsolved at this time, including an effective means to mount the weapon on a platform.

A next-gen EMRG system would need to overcome these challenges and, ideally, improve the operational range. Ripl Ltd, a UK start-up founded in 2021 as a ‘patent repository’ for evolved technology solutions, believe they have the answer. They have developed an entirely novel projectile system concept that delivers the next-gen capabilities required to make an EMRG operationally feasible. 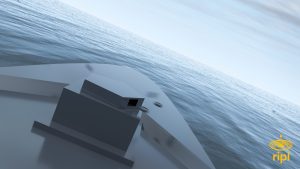 Ripl’s Railgun design suggests a fundamental change to the accepted notion of how an electro-magnetic projectile system should work. This results in reduced power and space requirements, meaning it can be integrated onto a far wider range of platforms, from aircraft carriers to frigates to patrol vessels. It is scalable in terms of size and effect allowing deployment on land-based platforms such as trucks, modified APC’s and towed as mobile artillery. It can also conceivably be hosted on satellites, drawing the required power for operation from solar energy.

Ripl’s innovative design also provides a solution that drastically increases the durability of the barrel well into operationally viable numbers (over 10,000 rounds fired) and enables a firing rate of over 200 rounds per minute (compared to 10 rounds per minute expected for the US Navy Railgun). The fundamentally new design of the barrel and projectiles also delivers an extension to the range making over 200 nautical miles a potential reality. Furthermore, the new projectile designs can be modified to carry different payloads enabling in-flight guidance to deliver effects on tracked moving targets. 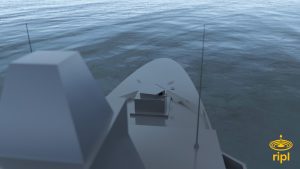 Applications of this technology step-change include: Long and short-range bombardment, anti-missile (including hypersonic)/swarm/aircraft defence, Close In Weapon System (CIWS) protection. The team at Ripl are engaging with elements within the UK MOD and hope to have similar conversations with other international parties to expedite development of this step-change advantage. Additionally, Ripl’s railgun solution provides a potential accelerator solution for nuclear fusion systems.

Ripl has access to some of the most inventive minds in the UK which it uses to deliver step-change improvements in capability across multiple industries including Defence, Automotive, and Rotary Flight.