In the early morning hours in Africa, a peacekeeping electronic warfare (EW) platoon loads its equipment into vehicles and drives through the gates of its forward operating base (FOB) towards the day’s area of operation. The platoon deploys two tactical COMINT teams at remote sites, while another team takes up position in military wheeled vehicles elsewhere serving as the third tactical COMINT team, Radio Frequency (RF) countermeasures team and vehicle-based forward command post (FCP). The three sites are networked via point-to-point microwave with the FCP linked back to the FOB via encrypted SATCOM to maintain a low RF profile and prevent interception of the communications. 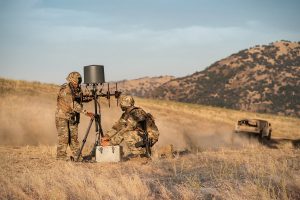 The FCP supplies a local common operational picture (COP) of the area of operation and transmits updates to the regional COP maintained at the FOB. The geometry of the sites provides optimal coverage for intercepting RF signals in an area to the south where insurgents have set up small encampments, as well as the ability to deploy countermeasures over the area of operation. Orders are to execute the EW mission for 24 hours, but cease and return to the FOB immediately if hostile forces approach occupied positions. 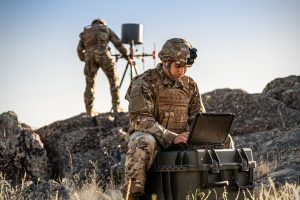 The COMINT teams initiate pre-defined RF surveillance missions that continuously monitor the electromagnetic spectrum for signals of interest from predefined friendly, hostile, neutral and new/unidentified emitters. The teams monitor RF traffic between hostile forces, looking for patterns that may indicate changes in the disposition of hostile force readiness and any initiation of their operations.

Three hours into the mission, a new signal is detected by the southern-most COMINT system. The new signal is coming from a location to the south and west of current hostile targets. The electro-optical/infrared (EO/IR) imaging system is tipped by the COMINT systems to look towards the new signal, but the emitter is too far to be identified. The new signal registers on the local COP as an unknown emitter moving to the north, a track that will pass between the hostile forces and EW platoon locations. 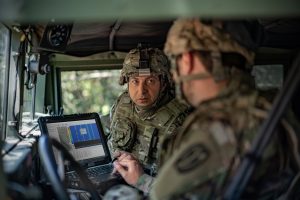 The new signal is recorded and transmitted to the FOB for processing by signal analysts, but a high degree of latency delays receipt and processing/identification of the signal for more than an hour. The signal is identified as coming from radios commonly used by insurgents operating across the border 100 km to the east, so this data is sent back to the FCP and the local COP is updated with the emitter classified as likely hostile. The new emitter is subsequently identified using EO/IR as coming from a weaponized pickup truck leading a small convoy of three similar vehicles.

The COMINT teams then identify RF traffic that appears to be communications between the original hostile forces and the new insurgent vehicles. The convoy stops and engages in optical surveillance, potentially identifying the location of the EW platoon, as they deploy a small drone in the general direction of the platoon. The mission CONOPS call for RF countermeasures to be employed against the drone and the controlling forces to ensure the EW platoon is not identified and located by the drone, and that information communicated to hostile forces.

One weaponized pickup truck leaves the convoy and speeds towards the closest COMINT team, evidently having located them visually. The FCP calls in a fire mission to cover the COMINT team as it disengages and withdraws, the artillery comes dangerously close to their position due to the proximity of the attacking vehicle. The vehicle is destroyed, while the remaining vehicles withdraw towards the position of the original hostile forces. The two remote COMINT teams disengage and head back towards the FOB. The FCP and other EW assets then withdraw, continuing to jam communications in the area of operation until line of site is lost.

The EW platoon returns to the FOB safely, but the insurgent vehicle came very close to overrunning one of the COMINT teams. The after-action review (AAR) determines the EW platoon obtained valuable intelligence: the insurgents to the east have joined forces with the in-country hostile forces. The AAR also concludes that the EW platoon was put at higher risk due to the time lag of transmitting the unknown signal to the FOB, analyzing and identifying that signal, and relaying that information back to the FCP. The recommendation is to minimize this latency in the CONOPS.

TCI is continuously improving the capabilities and performance of its COMINT systems to provide faster signal intercept and analysis, more accurate geolocation, greater CONOPS flexibility, more reliable communications in high- and variable-latency data links, and the ability to react faster on the front line.

A new Blackbird Mission Commander function (BBMC) within the Blackbird NextGen software will enable a higher degree of operational control over multiple COMINT assets across tactical networks. The BBMC provides full remote control of the single or multiple COMINT systems at local, regional or theater-wide levels. The mission commander can operate locally during EW platoon deployments, or from remote FOBs and permanent bases, the only limitation being the availability of tactical data links.

A new emitter database enables collection, storage, processing and retrieval of key SOI parameters in a centralized database that can be housed and mirrored at the platoon, company, brigade and higher command levels. Key information from the central database and real-time operations can be displayed on an enhanced Blackbird COP using multiple map layers and standard NATO symbology at multiple command levels.

Improving reaction time by moving signal processing to the EDGE

The AAR conducted in the scenario concluded that delays caused by sending signals of interest (SOI) back to a FOB for processing and emitter identification resulted in slow identification of, and reaction to the new threat. TCI’s solution to this challenge is to move the signal processing function to the “EDGE” of the network using radio frequency machine learning (RFML) techniques hosted on the new COMINT platform in 2021. TCI is developing RF signal processing that will apply machine learning to time-series I/Q radio samples and channel measurements, enabling it to learn from data.

RFML employs a form of artificial intelligence (AI) to learn the characteristics of RF signals to detect and identify them. The process includes training an RFML engine using real-world RF signals to enable their detection and classification in near real time. By training the system to learn signals from I/Q representation, systems can achieve better performance than traditional decision-tree approaches. TCI will utilize real-world signals to train the RFML engine, ensuring the neural network is able to rapidly learn new signals and quickly adapt to changing RF environments.

Thus, military forces can derive both operational and tactical benefits from COMINT/SIGINT without having to choose between the two.