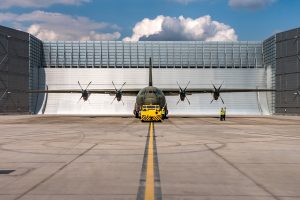 It was very good last week to observe HMS Severn, one of three Royal Navy Batch 1 River-class Offshore Patrol Vessels being recommissioned alongside the preserved HMS Belfast on the River Thames. This was in fact, the first Royal Navy vessel to have been recommissioned since the Falklands War and it is a demonstration that occasionally, because of changing conditions and requirements, common sense does prevail within Defence Headquarters.

HMS Severn had formally been decommissioned in October 2017 (although paperwork was never completed) and it had been intended that sister ships, HMS Tyne, Mersey and Clyde would also leave Royal Navy service in 2018 and 2019 respectively.

However, due to the UK’s decision to leave the EU and the increased requirement to control, protect and enforce UK waters and fisheries the, in November 2018 the then Secretary of State for Defence, Gavin Williamson announced that the first three Batch 1 River class vessels, HMS Tyne, Mersey and Severn would now be retained for that purpose and would become part of the renamed Offshore Division of the Coastal Forces Squadron.

The fourth of class, HMS Clyde which had been modified when built in order to fulfil the important role of duties within the South Atlantic and Falkland Islands and which had been leased to the Royal Navy via a Public Private Partnership rather than acquired outright was decommissioned in December 2019 ahead of its transfer to the Royal Bahrain Naval Force where it now serves as Al-Zubara.

Three additional Offshore Patrol Vessels which had been based on the River class design were built by BAE Systems at its Clyde yards between 2014 and 2020 – HMS Forth, Medway and Trent are all now in service with the Royal Navy.

The decision taken by Gavin Williamson to reverse the earlier 2012 decision to withdraw the first batch of River-class vessels made by Philip Hammond, one of his predecessors, was as far as I am concerned a class act and one that is regarded by many as being one of the most sensible and necessary to emerge from a period that led up to the UK’s final withdrawal from the EU.

Now, in my view and that of many others, is the time for the current Secretary of State for Defence, Ben Wallace to rethink the decision to scrap the UK remaining RAF fleet of 14 Lockheed Martin C-130J aircraft.

At a time when France and Germany have been acquiring additional C-130J capability, despite both having A400M fleets, why is it that the UK considers that de-prioritising the many important elements of strategic lift capability by withdrawing C-130J’s in 2023 is logical? Britain seeks to play a larger role in the international community and yet it is increasingly being perceived as an also ran that is content to pair traditional defence capability requirement to the bone. Showing presence and displaying soft power is of course important but when it comes to events such as the evacuation of UK personal and those who have assisted the allied cause in Afghanistan it is hard power that wins the day.

Of course, suggesting that the UK has acquired 22 A400M Atlas – medium/heavy-lift capability that goes faster, can carry a lot more personnel, equipment and overall weight and also that these aircraft, despite the many teething problems and issues they have had, are more modern and efficient is certainly correct. No argument about that but can they conduct all the requirements, all the highly special secret roles that the UK occasionally has and that of necessity, rarely get publicity and that continues to be provided only by the C-130J? The answer, as a desert extraction conducted by a C-130J aircraft in the dead of night two weeks ago somewhere in Afghanistan last month proved, no they cannot.

Yes, A400M Atlas can certainly carry larger numbers of personnel and equipment and far heavier weights than a C-130J can do and a lot faster too. But what A400M Atlas cannot do yet is replicate the need for what I recently saw described as being ‘rough field special forces requirement’ and for which the A400M is probably too large and in any case as far as I am aware, not yet cleared to undertake.

As alluded above, a good example of this were the unconfirmed reports from last month suggesting that an RAF C-130J turned off its identification transponder and responding to requests for immediate extraction, the aircraft landed in pitch darkness in a desert area somewhere in Afghanistan in order to pick up members of the UK special forces.

The need to potentially undertake missions such as that described above is most probably why France, a nation hardly given to acquire a US built military aircraft that easily, saw an urgent need to acquire 4 new C-130J aircraft. Similarly, it may well be why Germany also decided to acquire 6 C-130J’s of which I believe the first aircraft has now been delivered. The bottom line of such an argument is that no matter what direction western politics moves, special forces requirements are not going to go away.

I do not suggest that all remaining RAF C-130J aircraft should be retained and I accept that having been used and dare I say, abused over many years (the first Lockheed Martin C-130J aircraft of which the UK was the lead customer when these aircraft were first ordered in 1994 and delivered from 1999 onwards) should be retained and that re-sparring of those aircraft should continue as planned.

And by extending their use until say 2030 we should, if we deem necessary at the time, replace them. Given that the C-130 is considered the workhorse of governments, I am sure that this fine aircraft will still be in production then – a remarkable record given that the aircraft that led to the C-130 Hercules first flew in 1954. Few aircraft in service today carry such a remarkably long record of capability success as the C-130 and while US built, engines are made by a subsidiary of Rolls-Royce.

I well understand that having acquired 22 A400M’s that there is an argument that says the UK has no shortage of lift capacity and capability. Despite questions raised ahead of the Integrated Review process as to whether we need to maintain a fleet of eight Boeing C-17 Globemaster heavy-lift aircraft, thankfully due to C-17 being the only aircraft capability that we have that can carry large helicopters, all eight of these majestic aircraft based at RAF Brize Norton have been retained. RAF Airbus Voyager aircraft can also carry larger numbers of military personnel than the predecessor VC-10 and TriStar capability. But when it comes to being the workhorse of militaries all over the world, nothing compares with what a C-130 can do at the opposite end of the lift scale – this is an aircraft that is not only very reliable but does what it says on the tin.

I also recognise that there are those within Defence Headquarters who will see the RAF C-130J aircraft as being easy to sell to other air forces – in fact some have already been sold. That may help the MOD coffers but it won’t help our already stretched specialist capability and what sort of message does it send to our allies let alone our would-be enemies.

Afghanistan will I hope have taught us a lot and one of the biggest lessons to learn from our brilliant handing of the Afghanistan evacuation is – make sure that you have sufficient capability to match each and every mission requirement.