As global conflicts continue to grow and evolve, it is increasingly important to have the ability to react quickly and effectively to neutralize hazardous devices and materials. Mitigating a wide range of threats such as improvised explosive devices (IEDs), chemical, biological, radiological, and nuclear (CBRN) threats, and other explosives and hazardous materials requires flexible and versatile solutions. In this challenging, high-threat environment it is critical to have systems that can be deployed to rapidly and remotely render these devices safe.

Robotic systems have proven to be a crucial part of the solution to explosive ordnance disposal (EOD) and handling of hazardous materials (HAZMAT). However, there is a limit to what many existing robots can accomplish, often requiring operators to put themselves in harm’s way and manually render devices safe. All too often the robots cannot be depended on to consistently operate in challenging environmental conditions or in the presence of electronic jamming equipment.

L3Harris robots were designed as a solution to these problems and have already been proving their benefit through active fielding by UK MOD.  As part of project STARTER over 100 L3Harris T7 robots have been delivered and are actively being used by UK EOD forces both within the UK and abroad.  Weighing approximately 320kg and equipped with a manipulator arm over 2.2m long, the T7 system provides a robust and reliable EOD capability.  Through high precision dexterous robotic manipulation, the ability to deploy powerful EOD disruptors, and the ability to deliver and interoperate with electronic countermeasures, the T7 provides a step-change in capability.

As a large robot, the T7 is well-equipped to tackle larger threats such as vehicle-borne IEDs (VBIEDs). However, when missions require operating in smaller spaces and deployment from smaller logistics support vehicles (LSVs), a larger robot may not always be appropriate.  Medium-sized robots, weighing closer to 100kg, are often more suitable for these missions.  In many cases, moving down in size from a large robot to a medium-size robot comes with substantial trade-offs, including limited manipulator reach, limited manipulator lift, reduced ability to utilize payloads, and limited ability to fire large calibre EOD disruptors. That is where L3Harris’ new T4 robot is a game-changer. 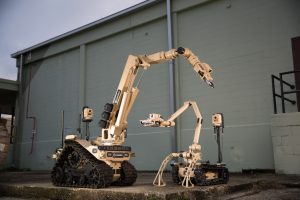 The T4 robot, weighing in at just over 100kg, is the new L3Harris medium-sized robot.  Effectively a smaller version of the T7 robot, the T4 retains a lot of “big robot” capabilities in a much smaller package.  Equipped with a 2m long manipulator arm that can lift up to 55kg near the robot, the T4 is able to access and manipulate threats that are normally too large for robots of this size. This reach and strength is essential, as it provides the ability for the robot to access and defeat person-placed devices.  Additionally, T4 is equipped with unique stabilizers mounted at the base of the arm, which act like outriggers on a construction crane and ensure that the T4 system remains stable even when performing heavy lift actions to the side of the robot.  These stabilizers also provide outstanding assistance for climbing and manoeuvring the robot over obstacles. 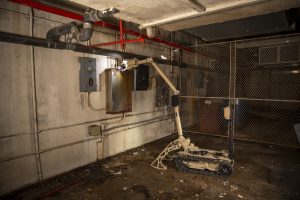 Another extremely unique aspect of the T4 system is its ability to fire all of the UK’s current in-service EOD disruptors.  The T4 system incorporates a patented recoil-absorbing system that reduces the recoil forces transmitted to the robot arm by over 90%. This allows T4 to repeatedly fire even the most powerful disruptors, including HOTROD and PIGSTICK, which would typically only be employed by large EOD robots.  As a result, T4 is able to deliver maximum disruptive effect and provides certainty that threat devices are fully rendered safe. 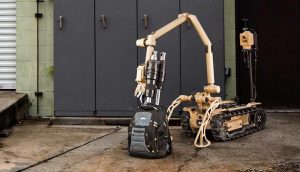 As robotic systems increase in capability, they often increase in complexity – and complex systems often require lengthy training, may be difficult to operate, and can put substantial burden on the operator.  That’s where the T4 and T7 systems stand out from the pack. 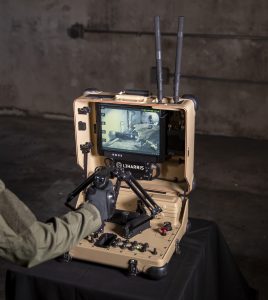 The L3Harris haptic controller for the T4 and T7 robots incorporates cutting-edge intuitive motion control and haptic feedback technologies, making operating the robot arm as natural as moving one’s hand. Holding a pistol-grip style interface, the operator can move their hand and the controller will measure that movement. It then commands the robot’s manipulator and gripper to mimic the movement of the operator’s hand. Custom-designed force sensors within the gripper fingers measure contact forces as the robot pushes or lifts objects. These force measurements are sent back to the controller, where the motorized pistol-grip interface reproduces the forces and pushes on the user’s hand. The net effect is that the robot moves how you move, and you feel what the robot feels – making the robot gripper almost an extension of your own hand.

The advantages of the L3Harris haptic control system have been independently verified by the US Army Research Laboratory (ARL) in human factors testing, concluding “100% of the users indicating it either somewhat improved or greatly improved their overall mission performance,” leading to 20% reduction in task completion time and operator workload.

The L3Harris haptic controller is compatible with both the T4 and T7 systems.  As a result, operators are also easily able to transition from controlling one robot to the other.  Operators who are trained on the T7 system can learn the T4 system in a fraction of the normal training time due to the common control system.  Operators can even switch between control of different robots on the fly with a single controller due to the common radio system, enabling T4 and T7 systems to be used concurrently by a single operator with a single controller.  And with T4 and T7 sharing many common parts, including lights, cameras, wire cutting blades, and gripper fingers, the repair and support of the robots is greatly simplified. 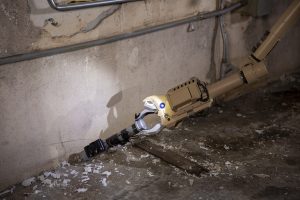 Putting Capability on Target with Easy Deployment and Payload Flexibility 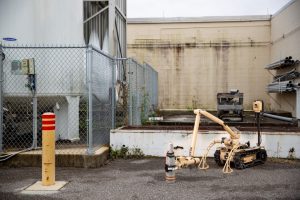 The T4 is compact, with a footprint of 45cm wide and 92 cm long, so it is sized to fit into tight spaces such as the aisles of commercial passenger vehicles.  This compactness not only allows access to small spaces, but it enables T4 to be transported easily as well.  The T4 manipulator arm is attached to the chassis with a tool-free quick-release mount.  As a result, the system can be rapidly broken down into subsystems that can be easily carried by two people.  This also provides a great deal of flexibility for transporting the system and it can easily be deployed out of almost any passenger vehicle. Once on site, the system can be quickly assembled and readied for a mission.

Not only is the robot easy to deploy, but once the system is on site customers can be confident that the T4 system fits within their overall mission. Because the T4 design is built on the foundation of the T7 system and re-uses many of its components and electronics, the T4 leverages rugged, reliable hardware that has been proven to operate reliably in austere environments. Moreover, the T4 is designed from the ground up to operate in extreme electromagnetic environments, with aerospace-grade hardening against electromagnetic interference (EMI). As a result, the T4 is able to operate

The T4 system also provides flexibility for the future through support for integration of third-party sensors and payloads. Using standard Ethernet interfaces, the T4 enables third-party data to be passed into the robot and through the robot’s communication link to the controller. By enabling easy upgradability for future sensors and payloads, the T4 provides the flexibility to be adapted to evolving threats both now and in the future.

In summary, the T4 provides the versatility and capability to defeat a wide variety of threats quickly and decisively, ranging from dexterous high-precision manipulation to firing high-power disruptors. The T4 was designed from the ground up to operate reliably in the most austere environments. Backed by L3Harris’ global support footprint and trusted partnership, the T4 provides a capable, dependable, and affordable solution to the most challenging EOD and HAZMAT missions. The T4 delivers confidence that it will be there to go into harm’s way so you don’t have to.