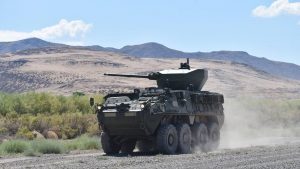 “The Oshkosh team brought together best-in-class capabilities for weapon system design, manufacturing, and integration to provide a highly capable solution that meets the Stryker MCWS program requirements today and offers the flexibility to upgrade tomorrow,” said Pat Williams, Vice President and General Manager of U.S. Army and U.S. Marine Corps Programs for Oshkosh Defense.  “Our experienced team looks forward to supporting the Stryker program office to quickly field this capability to the Warfighter.”

The U.S. Army’s selection comes after the completion of the test and evaluation of Production Representative Sample Systems (PRSS) at Aberdeen Test Center in Maryland.  The PRSS were evaluated against stringent vehicle and turret performance requirements.

The Rafael SAMSON turret has been chosen for the Lithuanian Boxer fleet and BATTLESPACE understands that it has been offered for consideration to the UK for its Boxers.

Oshkosh Defense LLC, Oshkosh, Wisconsin, was awarded a $942,900,000 cost-no-fee, cost-plus-fixed-fee, firm-fixed-price contract for procurement of the production, integration, engineering and logistical support, and fielding of Stryker Medium Caliber Weapon System vehicles. Bids were solicited via the internet with three received. Work locations and funding will be determined with each order, with an estimated completion date of June 2, 2027. U.S. Army Contracting Command, Detroit Arsenal, Michigan, is the contracting activity (W56HZV-21-D-0017).