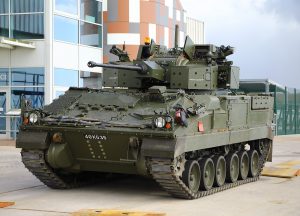 With Parliament now in recess and, as I noted yesterday when sending the speech delivered by the Chief of the Defence Staff to RUSI, a defence ‘White Paper’ that the government had initially intended to rush out two weeks ago and that would confirm a list of widely anticipated planned cuts to conventional defence capabilities and that will now unlikely to see the light of day until well into January, please spare a thought this morning for many thousands of highly skilled engineering workers who will go into the Christmas and New Year break uncertain about the future of their jobs.

Following a range of deliberate MOD leaks that have caused wide scale rumour and speculation in respect of the range of defence capability cuts to be expected – none of which have as far as I am aware been denied at any stage by the MOD – the one that I will concentrate my initial comments on today concerns the future of the Warrior Capability Sustainment Programme. .

I have previously written in great detail on Warrior Capability Sustainment Programme and stressed the vital importance that this important upgrade programme goes ahead. Yes, there have been a number of delays caused by a variety of issues both in regard of MOD requirement change and development problems but importantly, since the programme was re-baselined in 2017, suffice to say that each and every programme milestone set has been either met or exceeded by Lockheed Martin.

Bottom line is that Warrior has performed extremely well through all the tests and tasks asked of it and put through and yet, the MOD has so far failed in the promise made by the then Defence Procurement Minister Stuart Andrew in February 2019 to commit to manufacturing early in 2020.

Having completed a long phase of trials and testing of the new turret and other modifications required in Warrior Capability Sustainment Programme over the past year and for which Lockheed Martin UK engineers have, at the company’s highly invested centre of excellence in Ampthill, Bedfordshire and at other MOD sites, completed the programme development and test phase, they continue to await a final manufacturing contract award from the MOD. Suffice to say that persistent rumours of the programme now being one of many that could be on the list of capability programmes to be cancelled in the upcoming White Paper have caused considerable hurt amongst those that have worked so hard to get the development job completed and that would provide the Army with upgraded armoured capability that it urgently requires.

Let the Government be well aware that if Warrior Capability Sustainment Programme is cancelled that this would put thousands of highly skilled engineering jobs at risk and in the process, remove in excess of £1 billion from supply chain jobs.

Let the government also be aware that cancelling Warrior Capability Sustainment would potentially reduce more UK sovereign base defence manufacturing capability for good. It would, as I have already suggested, be a major blow to the Army and the loss of such a hugely successful armoured fighting vehicle, one that has served the UK so well across many international deployments, is one that I well know those that have used it would find very hard to contemplate.

Published yesterday as an independent report looking at the value to the UK economy of our involvement and Tier One partner status in the Lockheed Martin F-35 programme below I will attempt to highlight some of the most important aspects of this interesting review.

For the UK the F-35 is a hugely important programme and with Lockheed Martin expecting to have delivered 121 new aircraft to customers during this year it is a programme that is going extremely well. The UK recently received three more F-35 (B) STOVL variants taking the total number of aircraft in service with the Royal Air Force and Royal Navy to 21 of 48 currently on order and of a still, at the time of writing, intended number of 138 aircraft to be purchased through the programme lifetime.

Announcing the detail of the KPMG report Lockheed Martin UK CEO Peter Ruddock outlined the economic benefits of UK F-35 participation at £40.6 billion ($55.2 billion) gross value added between the period 2007 and 2038. UK companies are responsible for producing 15% of every F-35 built by value, with the major beneficiaries being BAE Systems and Rolls-Royce although including many other defence manufacturing enterprises spread across the UK and that support 20,000 UK jobs. Note that the report considers only directly managed Lockheed Martin contracts here in the UK and does not include additional added economic value from other companies such as Rolls-Royce and GE.

In detail the report suggests that in terms of economic benefits the F-35 programme will contribute £40.6bn in Gross Value Added (GVA) to the UK Economy between 2007 and 2038 of which £34.2bn is from Lockheed Martin-managed contracts and that £9bn has been generated to date. For every £1 of direct GVA by the programme, an additional £326 of indirect GVA is also generated and that the greatest GVA impact is in the North West of England which is expected to see roughly £14.8bn of the total and between 7,340 and 7,527 annual full-time equivalent jobs.

In respect of Capital, Taxes and Other Investments the report confirms that the F-35 programme has so far enabled £13.5bn in exports for the UK and that Lockheed Martin itself has a capital investment programme in the UK of £601.8m. In addition, the F-35 programme has enabled £3.3 billion of knowledge transfer and £29.7m in training and technical assistance to UK companies. This training and technical transfer includes areas such as digital manufacturing and low-observable technologies.

In respect of Tax Revenue across Lockheed Martin and Rolls Royce contracts, the F-35 programme is expected to generate £17.0bn through 2038 and in terms of jobs, that on average the F-35 programme will sustain over 20,000 high-value engineering jobs per year for the UK until at least 2038 – the average GVA from this per full-time equivalent job being put at £88,049, greater than the average for industry  (£79,516) and for the UK as a whole, (£59,802).

This new study backs up the 2010 jobs estimate and increases estimates for total Gross Value Added but it does not include contracts placed directly by the F-35 Joint Program Office and the UK MOD directly with UK organisations – a prime example of this being the UK’s Maintenance, Repair, Overhaul and & Upgrade entity for Europe, Sealand Support Services Ltd, which has initial work of £500m and that is projected work up eventually to in excess of £2bn, all of which adds additional F-35 related benefits to UK industry but is, as already said, beyond the scope of KPMG’s study.

For the UK F-35 Lightning operation is about partnership. The capability is already a critical element of UK national security & combat air strategy. Aside the unique short take-off and vertical landing capabilities that provide the UK military with strategic carrier strike capability advantage, enabling anti-sub and anti-surface missions to be undertaken, the F-35 is fully interoperable with the assets of key UK NATO partners. The strategic importance, operational benefits and interoperability of F-35 to the UK cannot be understated.