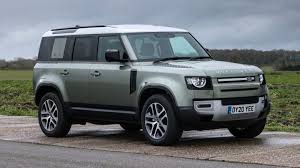 It was with great excitement that the Editor was invited to test drive the new Land Rover Defender 110, the replacement for the iconic Defender first introduced in 1948 as the Land Rover Series 1 on August 12th . I had seen several videos online of cross-country test drives which seemed to indicate that the new Defender is a step up in class from its predecessor, sadly I was to be disappointed!

I learnt to drive on an ex-British Army Series 1, my first car was a Series 2A Short Wheelbase, I sold 6×6 Land Rovers and Range Rovers in the eighties, later I had a Discovery and two Range Rover Sports, the last being a fantastic car – unfortunately replaced due to the London diesel rules by a boring, much hyped and uncomfortable Jaguar ‘F’ Pace, the replacement of which was discussed at length yesterday!

My manager for the test drive gave me a quick tour of the vehicle which looks like a spruced-up Land Rover Long Wheelbase Station Wagon with added gismos, with none of the accompanying character. As seen by the spec at the end of this feature the vehicle is stuffed with tech hype as a selling point, ignoring handling and other issues.

Given the exorbitant price of £45,200 for this vehicle, I expected at least some comparison with the Sport, no comparison whatsoever, chalk and cheese! Having said this I did not expect a sporty 4×4 as this is not what the defender was made for, but I expected more than I experienced!

The first sign that my test drive was to be limited to ‘metalled roads only,’ came when the manager told me that on no circumstances could I attempt to drive off road, not even on grass! So, no off roading today!

The first thing that strikes you about the new Defender is its sluggishness in pick up through the automatic gears. I took the vehicle down the main road where we encountered a number of roundabouts, that is where the performance issues raised their head.

The steering issues on the old Defender were part of the character of the car along with the accompanying rattles. But for a car costing over £45,000 the under-steer issues on the vehicle when negotiating a roundabout were terrible to say the least with pick up through the gears on the automatic box, sluggish.

My manager had warned me not to get a speeding fine, if only! Even with my foot hard down on the accelerator, I found it very hard to get the vehicle over 70 mph on a straight road without a hill in sight. If I had found a local hill to try, I would have seen how the engine performed uphill without any load or passengers.

After another run involving more roundabouts and straight roads, I decided to call it a day, without the chance of testing the suspension and handling performance on even a slightly rutted road.

My manager knew by the look on my face that he was not going to obtain a sale and we discussed the secondhand Sport sitting next door to my spanking new Defender! 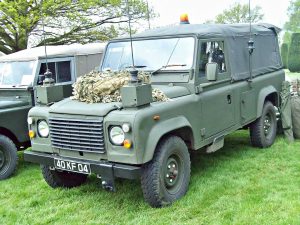 It was reported that JLR saw the British Army as a key customer for the new Defender considering the large numbers of ageing Land Rover Wolfs in the inventory. Unconfirmed stories abound that JLR were making LR Wolf parts obsolete to make the whole fleet unserviceable so a replacement would have to be decided. Certainly, the parts issues now being addressed by Hobson Industries and the MoD would certainly suggest some truth in this story with the fleet being of the road last year due to a number of spurious front wheel, housings breaking whilst driving. (See: BATTLESPACE UPDATE Vol.21 ISSUE 35, 02 September 2019, LOGISTICS AND THROUGH LIFE UPDATE, DE&S Land Rover Wolf spares contract) 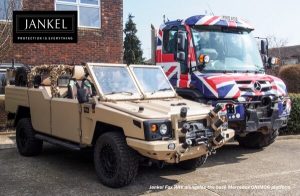 Given the competition from Ricardo, Mercedes-Benz and Jankel amongst others, as the new boy on the block, JLR is going to have to fight hard to prove that the new Defender is a shoe-in to its iconic predecessor. After my test drive it would seem to be an uphill struggle, particularly given the excessive price. Perhaps the SWB 90 version coming out next year might prove to be a better bet? Having said that the MoD has got rid of all their 90s, so JLR looks like having to bet the Defender Commercial 110.

When the 90 comes out next year, it would be interesting to make a comparison test drive between the two. I suspect that the 90 might give much better performance as the old 90 did Vs the Station Wagon. It is not clear whether the 100 is a stretched 90 or whether both vehicles were engineered from a clean sheet; I suspect the former given the performance issues I encountered.

Given the loads and armouring required by the Army, the issues I found on my test drive will only be exacerbated by the added weight. Weight Vs. Performance has always been an issue for any new vehicle. I am remined of previous failed projects such as the GKN AT104 and the armoured New Zealand Pinzgauers which could not go up steep hills when loaded!

The engine line-up comprises two petrols, one with mild-hybrid technology, and a couple of diesels. The P300 is the regular four-cylinder petrol, with 296bhp, while the bigger sellers are likely to be the D200 (197bhp) and D240 (237bhp) diesels. The hybrid is the P400, which has a straight-six turbocharged and supercharged petrol engine.

The new Defender is unrecognisable when it comes to technology. A suite of driver-assistance systems, connectivity features and infotainment displays makes it one of the most technologically advanced models Land Rover has ever produced. There’s also a new remote app which allows owners to pre-condition the Defender via a smartphone.