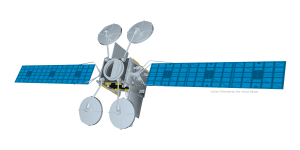 The F-35 Lightning II multi-role combat aircraft is the first ‘fifth generation’ fighter to enter service with the UK, being flown by both the Royal Navy and the Royal Air Force. History was made in 2018 when the first aircraft landed and took off from HMS Queen Elizabeth, now one of two Royal Navy aircraft carriers. Since then it’s been a series of firsts, as the new aircraft made its first armed flight, its first flight from Britain, and its first landing at night and is now on a significant deployment as part of a Task Group.

The capability of the aircraft marks a huge uplift for Britain’s armed forces, and also makes a significant contribution to the nation’s defence industry. However, provisioning for this aircraft onboard HMS Queen Elizabeth and HMS Prince of Wales, requires significantly more bandwidth and communications capabilities than previously seen in the Royal Navy.  This is unsurprising, given the acquisition timelines of both the aircraft and the carrier, but reflects an increasing challenge to defence – that of “gearing” the timelines for the acquisition of combat platforms with the far quicker upgrade cycles (in both expectation and capability) of information technology and the enabling communications networks

Commanders and crew are used to utilising the latest information technology ashore, to consume both entertainment and business information.  Service personnel who use instant messaging and video calling, on-demand TV and computer games, increasingly expect to have similar services when deployed.  However, in many cases, these expectations are not met, this is not always through an operational security constraint for a particular mission or a lack of funding.  Currently, most of the Royal Navy’s frigates, destroyers and aircraft carriers have less bandwidth available to them than many domestic consumers enjoy at home, or many commercial vessels afford their crews.

Meanwhile, companies are delivering TV solutions, crew internet, and flexible communications packages to commercial shipping, cruise liners and luxury yachts. If companies can deliver 24-100 Mbps to a home or business user, or even to a commercial airliner or ship, why is this not being done for a modern navy?

In some cases, improvements are being made.  But could it be done quicker and potentially more cost-effectively. So, what are the key factors that navies must consider?

Choosing the right services and equipment

Maritime platforms need both choice and resilience, often achieved through a combination of connectivity. Many Royal Navy platforms have both broadband (usually in X or Ku band) and narrowband (L and UHF) services for a mix of operational, tactical and welfare networks and many other NATO navies have a similar blend of systemsOften however, the throughput of these systems is limited, or they are allocated to specific tasks.

What could improve agile acquisition,  is a more flexible network infrastructure and antenna mounts, so that systems can be upgraded with ease.  This includes both specific Mission Task Equipment (MTE) for certain deployments and future technology to accommodate rising demands.  This would allow, for example, antennas to be swapped out or upgraded to access multiple bands or indeed a blend of constellation types whether GEO, MEO or LEO and hence bring additional choice and resilience as market opportunity is manifested in new space based capability.

Having more commercial bandwidth, in some cases alongside military satcom, helps both crew and combat missions, because, if the right systems are in place, ships will have the ability to prioritise bandwidth based on the task in hand and the electronic environment, for example, dealing with aggressive electronic action through using multiple communications routes.

Crew communications are key for welfare, entertainment, training and education. In fact, a recent Happiness Index report on the welfare of mariners in the commercial sector, published by The Mission to Seafarers, found that crew that have good communication with their families are much happier than those who do not.

A survey by the international maritime charity, Sailors’ Society, also found that reliable connectivity is of fundamental importance for mental wellbeing, operational efficiency and safety at sea, as well as its critical role in attracting new talent. This is increasingly the case for smaller, more regionally deployed navies and where the training times and retention of service personnel are critical factors.

With bandwidth upgrades necessary to support new military equipment and meet changing threats, now is perhaps the right time for navies to consider replacing direct TV at the same time, with internet services and content management solutions to  enable managed WiFi for mess decks and cabins.

This goes hand in hand with educating the crew on what they can and cannot do with personal devices and data, and when they might not be able to access it.  People in the military and commercial maritime users are familiar with constraints on their communications, and as more is provided to meet growing demands  it helps to understand how and why the system works and that the ship’s systems may require more bandwidth at different times, or indeed operate in a lower profile.  After all, people are not used to having critical infrastructure running alongside their games console at home.  Improving crew access is a key theme for retention and to enable education and training whilst deployed, but for naval platforms it is critical to manage data and ensure security is maintained, in some cases using mechanisms that centrally enable or constrain access.

It is widely recognised that many defence customers and organisations are considering how to improve the acquisition process and contract mechanisms in order to allow for innovative new solutions that provide flexibility, scalability and adaptability whilst ensuring value for money and through life support.  Bandwidth requirements to meet new ways of operating are accelerating at a significant pace and require a complex combination of hardware, software, government and private sector services to deliver and maintain.

It is generally accepted that a more collaborative approach is needed with industry to ensure quicker and more cost-effective improvements that can develop iteratively, rather than more rigid approaches that allow for little adaptability.  By ensuring the right approaches and processes are in place, navies will be better positioned to shape and exploit industry developments to meet the operational, tactical and welfare expectations and demands for decades to come.