Traditional defense and aerospace systems rely on older, proven technologies such as MIL-STD-1553, ARINC 429, and CANBus to support time-critical communications. However, those legacy data buses have not evolved to meet the challenge of ever-faster system operating speeds. On the civil aviation side, Ethernet technologies such as ARINC 664 (AFDX) and Time Triggered Ethernet (TTE) have gained some popularity, but these require significant up-front investment and high recurring costs. What’s more, these legacy avionics solutions aren’t flexible once deployed and cannot be dynamically configured. As an open standard technology supported by many major semiconductor suppliers, Time-Sensitive Networking (TSN) is designed to coexist with today’s low-cost existing Ethernet technologies.

TSN is a set of standards and capabilities that enable hard real-time use cases over standard Ethernet networks. Aerospace and defense integrators are envisioning digital backbones based on Ethernet for future ground vehicles and aircraft that support not only traditional data and communications traffic, but also support precision control over Ethernet for weapons systems, autonomous vehicles, and other devices historically controlled via legacy data busses. An example of this vision is provided by the UK MoD’s future looking “Digital Strategy for Defence,” which includes plans for the use of a seamless secure, singular, modern digital backbone.

TSN works dynamically, enabling time-sensitive communications channels to be configured and set up flexibly as needed in real time. TSN technology offers several important capabilities to embedded defense systems. It makes use of IEEE-1588v2 Precision Time Protocol (PTP) to provide clock synchronization between nodes. Once clocks are synchronized, TSN can be used to set up a deterministic communications channel between nodes. This setup can be defined with guaranteed parameters, such as throughput, latency, and jitter. 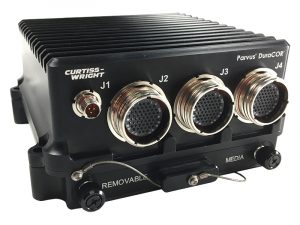 In the defense and aerospace market, TSN has great potential: Integrators are envisioning Ethernet backbones for future ground vehicles and aircraft that support not only traditional data and communications traffic, but also precision control over Ethernet for weapons systems, autonomous vehicles, and other devices historically controlled via legacy data buses.

TSN is not a single standard, but a collection of capabilities governed and managed by a number of separate IEEE standards. TSN uses a profiles approach that defines which specific set of features, options, configurations, and protocols are appropriate for a particular set of TSN applications. Some profiles are well defined, while others are still works in progress. For example, work is currently underway by SAE and IEEE on the Aerospace profiles (P802.1DP), which are being defined in SAE AS6675 Working Group as IEEE 802.1DP; these will focus on security, high availability and reliability, maintainability, and bounded latency for deterministic networks that range in Design Assurance Levels (DAL).

All equipment in the path from node A to node B that participates in this setup will reserve buffers and bandwidths and configure queue priorities to meet the request. Once set up, the nodes can communicate with the determinism that has been established. If the channel is no longer needed, the reservation can be taken down, returning buffers and bandwidth to other nodes that may need it.

As TSN matures for the defense and aerospace industry, leading commercial off-the-shelf (COTS) vendors are incorporating TSN capabilities into their products. COTS suppliers are starting to get up to speed on the potential benefits of TSN and investigating how to support it more fully as the next generation of Ethernet switching products takes shape. Today, for example, many Curtiss-Wright single-board computer (SBC) modules and mission computer systems can already take advantage, to varying degrees, of TSN communications, requiring only software support, and several next-gen mission computers and Ethernet switches from Curtiss-Wright are road mapped to fully support TSN connectivity as endpoints and network bridges, respectively. 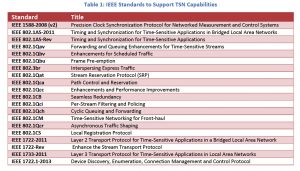