When Warfighters lives are on the line, detecting and locating the enemy or fellow soldiers on the battlefield is critical. Situational awareness is a crucial part of understanding current conditions in a Multi-Domain Battle environment to ensure the warfighter can integrate Army, joint, interorganizational and multinational capabilities that allow him to visualize and create windows of multi-domain superiority through fire and maneuver to positions of relative advantage in decisive tactical and operational level operations for the mounted platform and dismounted user, leader, or commander. To do this, mission command uses a combination of hardware and software to enable centralized interaction while integrating Command, Control, Computers, Communications, Cyber, Intelligence, Surveillance and Reconnaissance (C5ISR). Also integrating Electronic Warfare (EW) platforms and weapons subsystems into one holistic capability can give the warfighters the ability to monitor, control, and interact with the entire system simultaneously.

As an example, in 2014 Leonardo DRS, in partnership with key industry partners, undertook a substantial C4i demonstration of a new tactical command & control system for a Middle Eastern customer. The experience Leonardo DRS had derived from delivering similar capabilities to the US Army on FBCB2 as well as the Mounted Family of Computer Systems (MFoCS), and with the British Army on Bowman was the basis upon which  DRS’s communications and sensor integration capability has been designed and built. At the core of  Leonardo DRS’s approach to this new C4I capability was a highly innovative piece of technology called the Data Distribution Unit (DDU) also referred to as the ‘Magic Box,’ which enables voice, data, sensor and video applications and vehicle services to be integrated via a common, highly compact line replaceable unit (LRU). This is ideal for a tactical vehicle & command post environment where space is tight and an effective approach to size, weight & power and cost (SWaP-C) is a key requirement.

On October 14th 2020 Leonardo DRS, Inc. announced  that it has been awarded a contract to provide advanced situational awareness hardware and software for an allied Middle Eastern customer. The total fixed-price contract is worth $44 million. 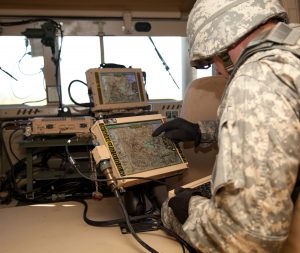 Under the contract, the Leonardo DRS Land Electronics business unit will provide a significant number of tactical mission systems to be installed into a wide range of tactical vehicles and across a number of brigades. At the core of the architecture is the latest version of the Leonardo DRS tactical voice, data and video tactical server, data distribution unit – block 4 (DDU-4), an upgraded digital vehicle intercom system and new rugged multi-touch commander’s display.

At the heart of the system, the new Leonardo DRS DDU-4 provides class-leading processing capability, an integrated router, LTE and GPS along with communications cross-banding together with video and voice management. These new products share much of their DNA with the Mounted Family of Computer Systems (MFoCS) II tactical computing products being delivered to the U.S. Army and other allies.

“We are honored to be selected to deliver a world-class tactical C4i capability to support our allies in the Middle East,” said Bill Guyan, senior vice president and general manager of the Leonardo DRS Land Electronics business. “Our solutions leverage many of the same technologies used in our products for the U.S. Army’s Mounted Family of Computer Systems (MFOCS) II program. We are proud to be the world’s leading supplier of mission-critical tactical computing and display solutions – a legacy that continues with this important contract award.” he said.

The tactical mission systems are designed to provide an ultra-reliable on-the-move computing capability with the latest cyber secure COTS technologies for mission-critical applications in harsh environments. In addition, the technology will deliver compatibility with other allied militaries using similar systems, including the United States.

The DDU-3, the version of the DDU used for formative phases of this key project is where all of the primary systems functions meet and get integrated. It is open and agnostic and supports multiple Virtual Machines (VM), one of these supporting the Systematic SitaWare BMS and Mission Planning Application. It also interfaces with the tactical radios. For this Middle Eastern customer as it is with many such systems, the ability to fully utilize the existing tactical communications infrastructure was vital. The DDU-3’s ability to interface to up to four (4) concurrent tactical radios, potentially each from a different vendor and with disparate waveforms, was a key to providing the voice and data interoperability. An inbuilt Wave-engine provides the ability to securely cross-band between say a Harris 7850M and Thales PR4G or even a 4G/LTE connected user interface (UI) device. This capability, coupled with the ability to interface the same DDU-3 to SatCom and LTE systems, was a game-changer and provided a degree of flexibility not possible before. The DDU3 also benefits from an embedded GPS (either commercial or Selective Availability Anti-spoofing Module (SAASM)) and as a backup to GPS, the option of interfacing enhanced long-range navigation (eLORAN) or L-Band for beyond line of sight Blue Force Tracking (BLOS BFT) services is also possible. The DDU-3 can also be interfaced to an INS/INU to provide system applications with a continuous dead reckoning of position and velocity. The DDU-3 was the foundation of delivering smart and cost-effective integration of the communications and sensor environment.

A highly effective Vehicle Intercom System (VIS) solution could also be integrated via the DDU-3, either to the network or standalone via its own Radio Interface Unit (RIU). The Leonardo DRS VIS is a digital-quality and resilient solution to providing cost-effective voice communication within tactical vehicles and command posts. The success of the live evaluation followed by implementation of an initial brigade of the new capability was the trigger for this key customer to roll out the system across additional Brigades where Leonardo DRS will be providing an enhanced version of the DDU in the form of the DDU-4 with upgrades to the Vehicle Intercom System and a new multi-touch Commanders Display.

Pete Hurst, vice president of International projects & Strategy  International Projects & Business Strategy for the  Leonardo DRS Land Electronics) said, “The success of our DDU based tactical systems architecture was that it provided a means to integrate and manage extant networks seamlessly while hosting a multitude of new capabilities such as Tactical LTE. The openness of the DDU to host many concurrent third-party applications and integrate with the vehicles real time systems was also a key enabler as it hands the end user effective control over how they want and need to develop their capability. The DDU does all of this while providing a new level of Cyber security assurance that is essential for today’s modern tactical networked environments.”

As tactical vehicle environments have become more complex over the years,  Leonardo DRS has been required to develop new hardware and software capabilities for the DDU. The Galileo Situational Awareness system being delivered to a South East  Asian customer integrates several primary vehicles’ systems into a capability that significantly reduces the reaction time taken to engage with this threat. The system also provides the means to share situational awareness both on the platform and with other networked vehicles in the same area of operations, as well as with high-echelon command posts and Headquarters (HQ). An interface connects the DDU and the shot detection acoustic array, with the weapons system turret and the infrared radiation (IR)/day camera and the Battle Management System (BMS).

The system integrates many C5ISR capabilities. A prime example of these capabilities, and one of the primary functions is to detect a gunshot and locate the source automatically. The system can then geolocate the source of the shot, pass a message to the overhead weapons system and automatically put its weapon and associated sensors, such as the camera and laser range finder, on the detected threat. The commander of the vehicle is presented with this data, and the related imagery from the weapons system and other vehicle cameras through the high-resolution touch screen display and can, in conjunction with other vehicle crew, decide how to engage with the threat. This entire sequence takes seconds and dramatically increases the ability to react rapidly to the threat.

The DDU is also connected to the BMS and as a result, the tactical network. The BMS application can be an application running on the DDU or could be an existing BMS system hosted by another processor. The DDU application has several critical pieces of data that are crucial to sharing any given event with other vehicles that it is deployed with and can assist in supressing the threat or would benefit from knowing about the threat. The DDU can pass this data to the BMS application, and in turn, the BMS application can plot the details of the detected shot on to a battle map that is shared across the network. Data including azimuth and inclination of the vehicle along with Laser Range Finder (LRF) data can also be shared, significantly increasing the level of situational awareness.

Leonardo DRS understands that enhanced situational awareness capabilities will be required to integrate with the military, civil and non-military land and sea platforms in a multi-domain battle environment. The integration includes hosting a variety of software applications on the DDU and interfacing with the various vehicle platforms, its subsystems, current military and commercial networks, and a variety of existing and new sensor technologies. This integration could potentially include platform sensor integration, leveraging additional military and commercial radios and networks for failover communications, weapons systems integration, video collection and distribution, etc. Leonardo DRS has a portfolio of fielded proven capabilities that could enhance any military’s position by providing a set of already developed mature technologies that together will provide enhanced situational awareness. These features include but are not limited to the following: advanced IP routing and switching, sensor integration including weapons systems, commercial and military radio integration, voice cross banding, video integration, Battle Management System (BMS) integration and the ability to leverage commercial cellular networks.

The fact that Leonardo DRS have such established positions with the US Army and Marines via its MFoCS project and are delivering similar tactical mission systems to various other allied nations should have a direct correlation to the needs of UK MoD as they develop their approach to future phases of LE TacCIS projects such as Morpheus, Trinity and NIOBE. At the heart of the Leonardo DRS product offering is a range of proven, off the shelf and sustainable technologies that provide the open systems and scalable infrastructure necessary to build coherent and secure mission systems.

The DDU’s functionality combines traditional computing, networking and distribution technologies into a small form factor, and embedded technologies allow the DDU to be deployed in a non-obtrusive manner without infringing on critical space or power requirements. The DDU provides an ‘everything over Ethernet’ backbone, allowing one or multiple users to access all electronics data within the vehicle. Numerous standard and non-proprietary interfaces are available on the DDU to allow connection to existing legacy mission equipment as well as support future integration requirements.