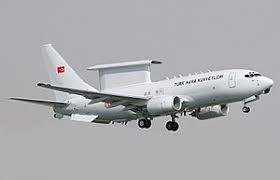 Yet another of what I can only imagine to be a ‘deliberate leak’ by the MOD and which Lucy Fisher, Defence editor at ‘The Times’ and who will soon be joining the Daily Telegraph as deputy political editor telegraph, has tweeted this morning saying “Britain is set to slash its order of early-warning radar jets, redrawing a controversial contract awarded without competition in bid to save money MoD has drawn up plans to revise order for E-7 Wedgetail jets from five to three”.

This time, it appears to be more than just about ‘testing the water’ with a ‘leaked suggestion’ about a possible cut in numbers – it appears from what MOD has this morning replied to the Lucy Fisher tweet saying that “officials reopened discussions with Boeing about the £2.1 bn programme over the summer with a view to achieving better value for money”.  I think we all know what that really means!

To say anything other than that I am appalled at the content of the tweet and which I have no doubt whatsoever to be fully in-line with current MOD botched thinking, would be an understatement. Indeed, I view any suggestion of cutting numbers of RAF E-7 Wedgetail aircraft from five to four let alone from five to three would have very dangerous connotations for future UK defence. I will elaborate my reasons further down.

E-7 Wedgetail is the world’s most advanced, capable and reliable proven in-service military command and control aircraft capability. The thought process behind the notion of cutting the number of aircraft is clearly based on the MOD saving on initial cost and through life operation. But cutting the number of airframes when we are talking of such specialist capability designed to rapidly identify airborne and maritime threats and guide RAF combat aircraft capability to specific targets and areas would be fool’s gold.

The UK needs all five E-7 AEWACS (Airborne Early Warning And Control System) ‘Wedgetail’ aircraft that it ordered from Boeing in March 2019 not only in order to replace the UK’s ageing fleet of Sentry E3-D AEW1 capability, but to ensure that they are there providing the information that fast jet pilots need when they are deployed.

Of all the many deliberate ‘test the water’ and other deliberate ‘leaks’ that have emerged from the MOD over the past few months ahead of final so-called ‘strategically’ thought out and led future intentions that will be made known later this year when the ‘Integrated Review of Foreign Policy, Defence and Security’ is published, I regard this one as being by far the most dangerous and one that I would personally regard as being little short of insanity.

Allow me to add this thought as well – if anyone really is still under the illusion that the underlying intention behind the 2020 ‘Integrated Review’ process – that of forming a soundly based long-term strategic decision making process of where the UK wants to be in the future, where, why and what defence and security capability will be required to meet those ambitions, let them now understand that the reality is that what eventually emerges will primarily have been about further cutting of UK defence capability at a time when others, including our adversaries and would-be enemies, are increasing their expenditure on defence.

Having spent many years looking at the various options to modernise or replace existing UK Airborne Early Warning and Control capability the decision to procure five Boeing 737NG airframes and convert these to E-7 ‘Wedgetail’ capability in order to replace what had originally been 7 Boeing E3-D airframes constructed for the Royal Air Force in 1991 was well received.

For the record, while it is true that the MOD followed the US, Nato and France in upgrading their E3-D/E capability to an extent (all E3-D/E users engaged in the ‘Radar System Improvement Programme’  twenty or more years ago) it has to be said that the UK having failed to upgrade internal capability let alone Sentry E3-D aircraft in order to meet required avionics and safety standards combined with the fact of maintenance and obsolescence costs increasing year by year and ever worsening rates of Sentry aircraft availability, often down to one available aircraft meaning the UK could no longer meet Nato AWACS commitments, rather than risk what most estimated would be well in excess of £2 billion initial cost in upgrading existing near 30 year old airframes, the long delayed and procrastinated over decision to replace Sentry capability stood out in the end as being the best cost, risk and capability option.

But if the decision to cut the number of planned E-7 AEWACS aircraft from five to three is now what the MOD intends, seen from a potential mission availability standpoint, the plan by the MOD will be a false economy – the point being that cutting the number of aircraft planned to be acquired from 5 to 3 will not provide the level of robust Air C2 and SA (Situational Awareness) capability that the UK needs.

Such is the seriousness of this that I would have to say that reducing the number of platforms from 5 to only 3 aircraft would leave the UK seriously wanting in respect of required Air C2 and SA capability requirement. Moreover, required depth servicing along with routine maintenance and training requirements would in my view preclude the Royal Air Force from its ability to provide assured 24/7 capability.

No one should be in any doubt that the decision to acquire 5 x E-7 air platforms was a very well researched and that in comparison to the very high cost of Sentry E3-D operation considerable operating savings would also be available. Ensuring that against any threat the UK can always retain control of the air is vital. AEWACS capability plays a very important role support the RAF fast jet community and as we have seen in recent weeks as more Russian Bear flights have threatened to intrude on UK airspace and that have seen an increasing number of Royal Air Force ‘Quick Reaction Alert’ Typhoon aircraft being scrambled from the temporary base at the Leuchars, the level of threat is increasing.

To be able to provide an absolute guarantee of 27/7 AEWACS capability requires that the UK has a minimum of 5 airframes. Potentially reducing the number from 5 to 3 would have very serious consequences and if this really has already been decided it needs to be reconsidered very quickly. Assured 24/7 AWACS capability is not just an option – it is an absolute necessity.

E-7 ‘Wedgetail’ is game changing capability designed to support 5th and 6th generation air warfare capability. Already proven in service with the Royal Australian Air Force which operates six ‘Wedgetail’ AWACS aircraft, E-7 based capability may properly be regarded in my view as being a 21st century solution to a 21st century problem providing ultimate Air C2 and SA capability for the air environment.

Fitted with modern e-scan radar, E7 ‘Wedgetail’ is far more capable than existing AWACS surveillance aircraft and fitted with an electronic array that allows energy to be directed either in a broad surveillance role, or in a narrower mode, brings a host of advantages that could also take it into the realms of targeting rather than just surveillance if required. This is, as I have said, game changing capability that will not only support 5th and 6th generation air warfare capability but provide the UK with reassurance of being able to see a potential enemy in the sky.

In what would undoubtedly be a complex and congested future war, once delegated it will most often be the airborne controllers that actually control the fight. I have written many times in the past that it is no use fighting an enemy that you cannot see. This, in my view, Control of the Air’ is always a non-discretionary task. Without it, more lives would undoubtedly be lost in the air, on land and at sea.

Importantly, the UK military requires a sovereign capability that provides AIR command and control (commonly known as Air C2) deemed necessary in order to allow fast jet capability to force entry into congested or unknown environments, to sense and to warn in complex environments and, when the rule of the air or the rule of law has been superseded by rogue actors, belligerence and conflict, to act accordingly.

While existing fast jet capability can provide intra formation situational awareness and provide localised air surveillance, it is the Air C2 platform that provides the very necessary broad awareness and establishment of friend and foe.

Within the broader ISR (Intelligence, Surveillance Reconnaissance) remit Royal Air Force Sentry E-3D AEW capability has been providing core airborne early warning and airspace management competencies, deconflicting airspace and providing the ‘big picture, of situational awareness for RAF and Coalition aircraft and early warning of aircraft movements outside of Coalition control. But, having flown on several Sentry E3-D missions myself, to say that the capability is now old, tired and increasingly obsolescent would be an understatement. Replacement is now a priority.

Originally an RAF fleet of seven aircraft, suffice to say that while Sentry E-3D capability has contributed to every major UK Air Operation since its introduction to service in 1991 it is, as a full capability, no longer to be considered fit for purpose. While the 2015 Strategic Defence and Security review called for Sentry E-3D capability to remain in service until 2035, the multitude of serious obsolescence issues, failure to meet a number of safety standards which led to a grounding of the whole fleet three years ago, combined with decades long failure by the MOD to invest ensuring that the computer based capability is up to date, have all taken a heavy toll.

For the record, as at 31st December last year, the RAF Sentry E-3D aircraft fleet comprised four aircraft of which three are in the forward fleet and one in what is termed as the sustainment fleet. Following the announcement in March 2019 that the UK would acquire five Boeing 737NG aircraft – it was only in May this year that Boeing awarded contracts to STS Aviation which is based at Birmingham Elmdon Airport, to convert all five 737NG aircraft acquired into Boeing E-7A Wedgetail aircraft for the RAF.

Urgency is a primary requirement and I understand that a further Sentry E-3D aircraft has now been withdrawn from service and placed in storage. Whilst the MOD has said that the Sentry E3-D fleet continues to routinely conduct Nato missions as part of the UK’s broad commitment to Nato Intelligence, Surveillance and Reconnaissance (ISR) operations and that the OSD (Out of Service Date) is being kept under review, with modifications on the first E7 not due to start until next year and the first aircraft not due to be delivered to the Royal Air Force until 2023, UK AWACS capability will remain in a somewhat weakened position for some time yet.

The situation will be made even worse by the similarly planned withdrawal of Raytheon ‘Sentinel’ capability next year – another crass decision by the MOD that will further reduce our competency and overall ISTAR capability. Thankfully we are now seeing Boeing P8 Poseidon capability entering service with the Royal Air Force but with a completely different mission set of capability, this does not alter the vital requirement ensuring that the UK maintains a sufficient level of AEWACS capability.

I sincerely hope that if the leak to the Times sums up current MOD thinking this will now be reconsidered with haste.