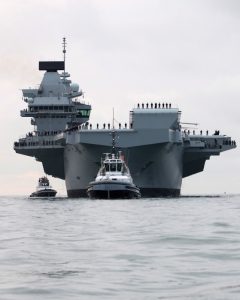 I listened with great interest this morning to the BBC Radio 4 ‘Today Programme’ presented live by Nick Robinson from the deck of the Royal Navy aircraft carrier, HMS Queen Elizabeth in Portsmouth.

Barring certain guests such as Sir Max Hastings engaged, no doubt, specifically engaged in order to provide a counter argument to UK Government strategy and speak out against the notion of restoring ‘Carrier Strike’ capability, projecting of influence, flying the flag not to mention the importance of our sailing and working with NATO allies, engaging with other important allies and reaffirming the ongoing commitment of the UK as a member of the ‘Five Powers’ defence arrangement that we along with Australia, New Zealand, Singapore and Malaysia signed up to fifty years ago in 1971, the issue was handled well enough through the three hour long programme. Senior Royal Navy Officers spoke well as did the Secretary of State for Defence Ben Wallace who said today that:

“The mission aims to show that Britain is “not stepping back but sailing forth to play an active role in shaping the international system. When our Carrier Strike Group sets sail next month, it will be flying the flag for Global Britain – projecting our influence, signalling our power, engaging with our friends and reaffirming our commitment to addressing the security challenges of today and tomorrow.”

I have lost track of how many Secretaries of State for Defence there have been since the now Lord Robertson of Port Ellen sanctioned the rebuild of UK Carrier Strike capability in the 1997/8 Defence Review but those that have followed have to their credit, whether right or wrong or indeed, forced to for other reasons, have stuck to the plan. The two carriers – HMS Queen Elizabeth and HMS Prince of Wales – not only in my view to be considered a great success story in respect of defence capability they are equally a great success story for the Aircraft Carrier Alliance industry partnership comprising BAE Systems, Babcock International, Thales Group and the MOD that built them.

Of course, the likes of Max Hastings did exactly what they were expected to do and, in his case, never losing a moment to criticise and paint the UK as having little credibility now as a military force and even going so far as to suggest that all the Chinese would do is laugh at us.

To that all I will say is that I don’t do ‘Yesterdays Men’ particularly those who as journalists, military historians along with others, like to harp back to the Falklands War and what we were once able to achieve when, as in that situation, we had been a stand-alone nation. Neither, despite the cost of rebuilding carrier strike capability and the negative impact this has had on other aspects of required air power capability and numbers of Royal Navy surface ships, do I have time for those who fail to understand issues surrounding the need for flexibility, interoperability, the vital importance of conventional and nuclear deterrence strategies and all that this means in a fast changing world, one in which the level of threat continues to increase. It is of course a sad fact that we had wrongly concluded a generation ago that defence was no longer the priority that it should be – yes, we lost our way and moved in a wrong direction and whilst I doubt the sincerity of government and in how it has attempted to address the issue in certain aspects of the ‘Integrated Review’ at least we are perceptibly moving now in a different direction – one that begins I hope to accept the importance of need for stronger defence.

I cannot of course argue that having failed to properly fund defence for a generation that we in the UK are now, in terms of mass and capability, a shadow of what we had been but for all that, preferring always to look forward and live in hope and determination, I am not about to  criticise what limited capability we now have or indeed the attempt by government, small though it is, to at least halt the decline.

I was waiting for the comment that with only eight of our own F-35-B STOVL aircraft on board HMS Queen Elizabeth for this first great planned deployment and that we are being forced to rely on US Marine Corps F-35B’s to make up the numbers and provide sufficient credibility. Hastings, being an Army man through and through, just doesn’t  get the importance of ‘Carrier Strike’ and that its importance isn’t about our threatening would-be adversaries on an individual basis but moreover, is about the UK playing its part in an international deployment, one that will involve ships and submarines of many other allied nations. Yes, ‘Carrier Strike’ is also about attempting to rebuild our status but it is certainly not about making a statement that we have the capability to operate unilaterally.

For the UK the upcoming deployment of HMS Queen Elizabeth will be the largest air group to operate from a Royal Navy carrier since HMS Hermes back in 1983. During what will be 28-week deployment in Asia that includes taking in visits to India, South Korea, Japan, Singapore amongst other nation states, supported by two Royal Navy Type 45 Destroyers, two Type 23 anti-submarine Frigates and sub-surface capability together with Royal Fleet Auxiliary support vessels, it is planned that HMS Queen Elizabeth will visit over 40 countries and take on over 70 specific engagements. Ships of other allied nations will also be taking part. are many reading this piece today that have been against the idea of the UK rebuilding ‘Carrier Strike’ capability and consider that there were far better ways of spending the defence budget. But we are where we are and, whether right or wrong, I am not about to engage in strategic decisions made by former governments over the past 25 years.

There are those of course who quite rightly point out that the 1997/8 Security and Defence Review had agreed on the need for two large 40,000 tonne aircraft carriers for the Royal Navy, each with a compliment of up to 50 aircraft and helicopters rather than what we got – two somewhat larger carriers each of 65,000 tons and limited numbers of UK military aircraft. I no longer have an answer for that other than to suggest that there are still lessons to be learned and also to say – isn’t it time that we moved on and accept the status quo?

With only eight Royal Navy/Royal Air Force F-35 B’s on-board HMS Queen Elizabeth, rather typical of the criticism heard today is that because we don’t have sufficient numbers of F-35 aircraft of our own we had no choice in respect of US Marine Corps being required to make up the numbers. Read that how you will but as far as I am concerned, although never actually stated as such by successive UK governments, it was always intended that US F-35B aircraft would, on international NATO or allied deployments, engage alongside UK F-35’s from our carriers.

I will no doubt be shouted down in flames by some for reminding of this, but as former US Ambassador to the UK, Robert Wood Johnson said last year “this is the special relationship in action “Our forces train, fight and win -side by side – to protect our two countries” and I might add, those of our NATO and allied partners.