The history of Kelvin Hughes can be traced back to the 18th century. Throughout, the company has been known for its innovation, agility and integrity. In 2017, the European sensors house HENSOLDT took the strategic decision to acquire the company, not only to benefit from synergies associated with its radar portfolio, but also to secure a United Kingdom (UK) based industrial facility with potential for growth. This decision was taken in recognition of the UK’s importance and global influence in Defence and Security matters, as well as the nation’s unique position post-BREXIT.

The acquisition paved the way for targeted investment in HENSOLDT’s UK business in order to bolster and extend the range and depth of its capabilities, capacity and expertise. The overall aim being to better serve the needs of HENSOLDT’s customers and partners within the UK through the employment of local resources.

Coinciding with the formal launch of HENSOLDT UK at the DSEI exhibition in London in 2019, HENSOLDT embarked on an ambitious and focussed growth strategy. This ensures that HENSOLDT UK is fully resourced and capable of undertaking the following work on behalf of the full HENSOLDT capability portfolio, from its UK headquarters in Enfield:

* Proposal generation and management – from expression of interest through request for information (RFI), pre qualification questionnaire (PQQ), invitation to negotiate/invitation to tender (ITN/ITT) and contract negotiation

The company has made significant progress since its launch and the UK business is already capable of effectively leading the provision of a number of products drawn from the wider group. “The most visible change, of course, is in the name. We are very proud to now operate under the name HENSOLDT UK,” explained Russell Gould, Managing Director of HENSOLDT UK. 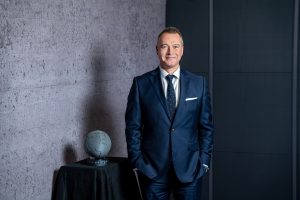 He continued: “Since the acquisition we have found that adopting the HENSOLDT name has helped significantly in terms of the company’s aspirations beyond those sectors traditionally served by Kelvin Hughes. HENSOLDT UK benefits from being integrated into a defence and security business with a truly global reach and portfolio to match. When you look back across nearly 300 years of trading, you find that we have changed our name many times – continuously evolving, improving, growing and becoming stronger. Becoming HENSOLDT UK is another step forward for us into a new and exciting chapter of the company’s history. In a challenging world, we remain a UK manufacturing and design company, but now with access to additional best-of-breed capability, enabling us to serve a wider range of UK customers in different market sectors”.

Going forward, HENSOLDT will further invest in its UK branch to extend the range of tasks and hence workshare undertaken locally in the UK. This will include full system and/or sub-assembly design and manufacturing, as well as the provision and local support of UK-specific product variants, where necessary, to assure UK sovereign operation and support. Thus, HENSOLDT is well placed to support the key tenets of HM Government’s Prosperity Agenda.

HENSOLDT’s Executive Committee recently commented that, through the establishment of its UK business, the company is looking forward to working ever closer with its UK partners, as the UK exits the European Union.

In September 2020, HENSOLDT became a publicly traded company on the Frankfurt stock exchange. The IPO was a key step in the strategic development of the company, which was based on the understanding that value creation will continue to happen both, within and outside of Germany. The UK is and will remain one of the biggest defence markets in the world after BREXIT, and HENSOLDT aspires to play a larger role in its success.

SharpEye – at sea and on land

Through its acquisition of Kelvin Hughes, HENSOLDT inherited and has further invested in the SharpEye range of 2D radars and integrated navigation bridge systems (INBS). These systems are used extensively by the Royal Navy and Royal Fleet Auxiliary. Recent successes include the fleet-wide Navigation Radar Programme, and new builds such as the Tide Class Tanker INBS, River Class OPV and an as yet undisclosed platform. 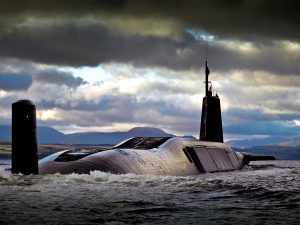 Variants of SharpEye radars are also used by a number of UK customers for coastal maritime surveillance, vessel traffic management, offshore security and of course for vital counter-drone applications at UK airports. 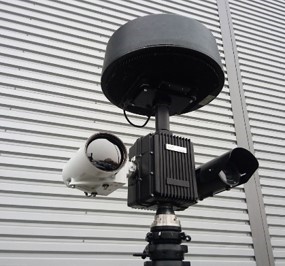 For many years prior to the acquisition of Kelvin Hughes, HENSOLDT has been active in the UK, contributing to a number of key MOD programmes. Two significant examples are outlined below: 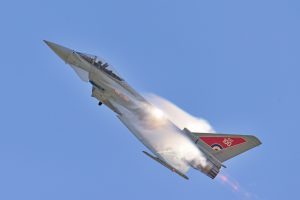 HENSOLDT remains in the vanguard of cutting-edge aircraft radar design. This was confirmed in July this year, when the German Government awarded HENSOLDT a significant contract to lead the development of the next generation of radar for its own Eurofighter fleet.

Identification, Friend or Foe (IFF) systems allow military platforms (ships, armoured vehicles and aircraft) to be identified precisely by automatically sending interrogation signals, which are answered by transponders on board friendly units. Field commanders are thus able to quickly distinguish friendly from hostile forces. Unlike Mode 4 used hitherto, the future Mode 5 standard employs state-of-the-art encryption techniques to avoid hostile manipulation of the signal.  In June 2017, the MOD awarded a significant contract to upgrade the IFF systems of 450 aircraft, ships and ground-based air defence systems of the British Armed Forces to the Mode 5 standard. This upgrade is being rolled out by HENSOLDT in partnership with Leonardo – an example of HENSOLDT cooperating effectively with partners in order to deliver a winning solution to the customer.

In its own right, HENSOLDT has delivered IFF systems to a total of 42 countries, including the majority of 29 NATO nations and their allies. HENSOLDT has approximately 450 IFF systems under contract for more than 80 different platform types.

HENSOLDT UK offers a comprehensive portfolio of sensors and systems for missions in all the various domains in which the UK Armed Forces and security agencies operate. Some examples are outlined below: 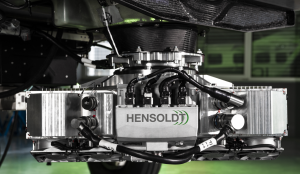 HENSOLDT is well known for its expertise in the field of combat aircraft radar. Drawing on this heritage, HENSOLDT has developed a highly capable and affordable airborne multi-mission surveillance radar, designed for Maritime Patrol Aircraft, helicopters and UAVs. This new radar, named PrecISR, translates the latest achievements in active array and digital receiver technology into a scalable high-performance sensor. PrecISR’s compact design is suitable for use on relatively small aircraft, where space and weight constraints are significant factors. Due to its software-defined radar modes and electronic beam steering, PrecISR can fulfill different tasks simultaneously. It is able to detect, track and classify more than a thousand objects.

Due to its innovative design and the fact that all radar related components are located outside the airframe, platform integration is significantly simplified compared to other radars. PrecISR’s superior precision and target accuracy make it the sensor of choice for surveillance of large maritime and coastal areas.

In 2019, HENSOLDT was awarded a contract to deliver a PrecISR system for aircraft conducting maritime surveillance and coastal range safety operations in the UK.

MUSS is a soft kill-based active protection system (APS) designed to defend armoured vehicles. It offers infantry fighting vehicles and tanks efficient protection against enemy laser and armour-piercing threats. These can be effectively countered by warning sensors that detect the threat from missiles or lasers and initiate appropriate countermeasures. The MUSS self-protection system is already in series production and has so far been delivered more than 350 times. HENSOLDT has recently fundamentally revised its technology. The improvements include a new laser detector that covers all modern laser threats.

The latest development, MUSS 2.0, offers improved and extended sensor technology, significantly improved software and modern countermeasures. MUSS is being further developed into a layered system and offers modern interfaces, which, among other things, enable the integration of a hard kill effector. In addition, MUSS 2.0 will be even smaller and lighter than before. 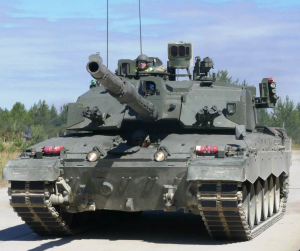 HENSOLDT UK offers a range of radars to meet different operational requirements in the land domain. These include Weapon Location, Ground Based Air Defence (GBAD) and battlefield surveillance:

HENSOLDT’s solution to counter sophisticated threats posed by modern artillery batteries is based on a layered defence approach. At the heart of this ‘system of systems’ is a weapon location derivative of its highly advanced 3D sensor, TRML-4D. The following diagram illustrates HENSOLDT’s concept by showing each sub-system element in context, and how the overall solution will operate as a whole.: 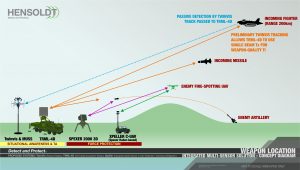 Traditionally, active radars have been used for GBAD applications and HENSOLDT offers a highly capable active sensor, TRML-4D. In addition, HENSOLDT offers a truly passive sensor that can be used to augment an active system or replace it when transmissions are not possible or advised.

HENSOLDT’s TwInvis is the world’s most advanced Passive Radar system and works by utilising the RF broadcast from multiple systems such as FM/DAB radio stations and digital television. TwInvis provides an accurate 3D radar picture out to several hundred kilometres. As there is no antenna rotation, the update rate is a function of the computing power in use and typically provides a refresh rate of less than 1Hertz.  Unlike an active radar, TwInvis provides constant accuracy out to the full effective range of the system. This accuracy is sufficient for target indication without risking transmission. 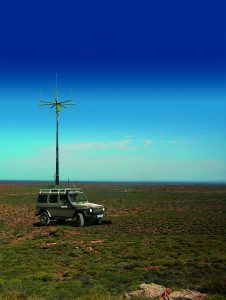 HENSOLDT offers two portable radar solutions for battlefield surveillance, the choice of which depends on the customer’s particular operational requirements.

SPEXER 360 is based on a rotating antenna housed within a rugged and lightweight radome. 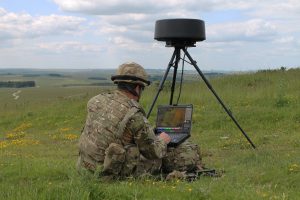 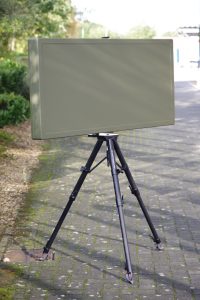 SPEXER 600 is a compact AESA antenna, designed to detect the smallest of targets at significant range.

Both of these radars are designed and manufactured in HENSOLDT’s Enfield facility and both utilize the latest advances in solid-state electronics and antenna technology.

Drawing on its extensive product portfolio, HENSOLDT can also offer integrated solutions for a variety of armoured vehicles. 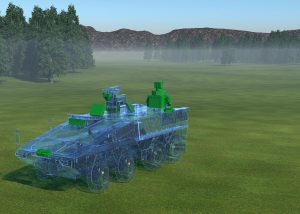 HENSOLDT UK can now draw on the group’s entire naval portfolio in order to configure a mission system suitable for all types of vessel ranging from an offshore patrol vessel (OPV) through to a complex auxiliary vessel or front line warship. This portfolio includes 3D surveillance and target acquisition radars, IFF, electro-optical surveillance and gun fire control, self-protection, electronic warfare and data links. HENSOLDT can provide these capabilities separately, as a sub-system, or as part of a comprehensive Combat Management System, all locally supported by UK personnel. 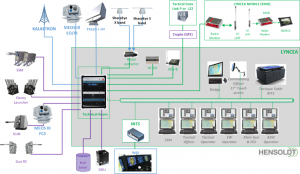 HENSOLDT UK recently completed the delivery of a fully type approved Kelvin Hughes Integrated Navigation Bridge System (INBS) for Polar-class logistic ship HMNZS Aotearoa for the Royal New Zealand Navy. This is one of the most complex bridge systems delivered by HENSOLDT UK to date and will be the basis of HENSOLDT UK’s INBS offering for future surface ship programmes in the UK. 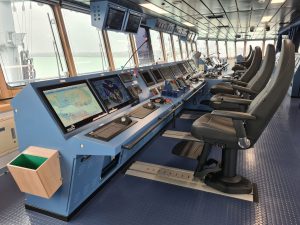 Through its acquisition of Kelvin Hughes and its continued investment in its UK business, HENSOLDT is well placed to support its partners and stakeholders in UK Defence post-BREXIT.

Rohan Dearlove, Sales Director HENSOLDT UK, commented: “HENSOLDT has already made a significant investment in the UK and, despite the challenges of CV-19 and BREXIT, we remain committed to growing our business here. The UK’s Armed Forces and security agencies are highly respected around the world, undertaking operations in the most challenging of conditions. Deployed personnel should have access to equipment which delivers maximum operational advantage, and I am proud that HENSOLDT UK can now draw on best-of-breed products and systems from across the HENSOLDT group to fulfil the most challenging of requirements. We recognize the need to assure operational independence whilst at the same time investing in the UK economy. HENSOLDT’s UK strategy delivers on both.” 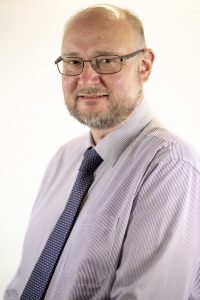