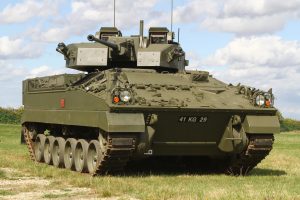 One of eleven inquiries that the House of Commons Defence Select Committee (HCDC) is currently hearing, the afternoon session today continues the focus on the procurement and use of Armoured Fighting Vehicles (AFV’s) and whether more could be done to ensure that the Army has the ability to deploy an armoured division.

Although there are others who might like to believe that they know better than our generals how to run to the Army, it is not for me to make any comment in relation to the Army’s ability to deploy an armoured division or not! My purpose here is to make further comment on Warrior )WCSP) procurement and to further attempt to set the record straight. To that end, I have made good use of Lockheed Martin UK’s written submissions to the HCDC Inquiry.

As part of the HCDC examination of AFV procurement and sustainment which includes how much has been spent over the last 20 years, the number of vehicles acquired, the committee is also asking the question of which capabilities might need to be sacrificed in order to cost overruns on core armoured vehicles and what gaps are emerging with the Army’s AFV capability.

While I understand the underlying intention, my plea here is that we do not find ourselves making yet another crass judgement that leaves any section of our military short of capability and capacity to do the job required of it. The world is changing and the UK must ensure that it has sufficient military capability not only to deter but to counter any threat. We should by now have learned the lesson that pushing back programmes or taking capability gaps is not the way to go.

Amid planted speculation that the Integrated Foreign Policy, Defence and Security Review could decide that the UK no longer required Main Battle Tank capability and that the current programme of AFV replacement and upgrade of older vehicles could be culled, this is one of the most important of the current HCDC inquiries.

Having already written on the subject of Main Battle Tanks I will restrict my comments here to the Warrior Capability Sustainment Programme (WCSP) – the upgrade plan of which Lockheed Martin UK was awarded the demonstration contract in October 2011, and to a lesser extent as I have not specifically followed the programme as a specialist, AJAX.

From the outset let me also say that I consider Warrior (WCSP) upgrade plan to be absolutely vital if we are to be in a position to say that the Army will, in terms of current and planned equipment capability, along of course with AJAX vehicle procurement for which General Dynamics UK is prime contractor and Lockheed Martin UK subcontractor (LMUK provides turrets and related systems for AJAX and has met all contractual obligations) really is be considered fit for purpose for at least the next 20 years.

Important too is realisation, as an independent report from KPMG commissioned by LMUK confirmed, on the basis of an anticipated 275 Warrior vehicles being upgraded between 2021 and 2029, Warrior WCSP would be likely to contribute approximately £1 billion to the country’s economy, The economic contribution is due to come from activities during the production phase undertaken directly by LMUK and through its UK based supply chain too.

The WCSP development programme is now in its final stages of trials and Lockheed Martin UK is in negotiations for a production contract with the Ministry of Defence to deliver the latest in advanced capabilities for up to 275 Warrior vehicles.

As part of the ongoing inquiry, in respect of that part of the inquiry relating to AJAX and Warrior AFV’s the HCDC will this afternoon take further evidence from General Dynamics and Lockheed Martin UK. I hope that I am proved to be wrong, but I fear that from others being interviewed this afternoon including a defence journalist and separately a defence consultant we may well hear arguments suggesting that the UK no longer needs Main Battle Tanks or AFV’s – notions that I myself would completely reject as missing the point of the role that they also play in respect of deterrence.

Amid much hype about delays and cost overruns on Warrior upgrade (WCSP) it is facts that matter. LMUK was awarded the demonstration contract for WCSP in October 2011.  The contract is for the delivery of 11 upgraded vehicles for Reliability Growth Trials (RGTs) and is supported by 31 major subcontractors and a wider supply chain of over 200 companies.  RGTs test the performance of the upgraded vehicles through representative ‘Battlefield Missions’ (BFMs) and other qualification and verification activities.  The delivery of the demonstration vehicles was completed by July 2018.  By mid-July 2020, 59 BFMs were successfully completed, earlier than scheduled, marking the end of phase one of the RGTs.  The RGTs are now in their final phase.

WCSP is intended to extend the service life of the Warrior vehicles beyond 2040.  The demonstration contract includes three elements that are specifically designed to ensure platform lethality, survivability and ‘fightability’. The MOD is systems integrator for the demonstrator phase and is responsible setting requirements, the provision of Warrior platforms for conversion, direct contracting of BAE Systems (now RBSL) as the Original Equipment Manufacturer and Design Authority for the in-service (pre-conversion) vehicles, selection of the base vehicle (hull) overhaul organisation, supply of the CT40 Cannon System, provision of GFX, approval of the in-service Safety Case, approval of the converted vehicle Safety Case, and acceptance of qualification evidence

It is important to realise here that Armoured infantry fighting vehicles contribute to all mission types, including high intensity warfighting, peacekeeping, peace enforcement counter insurgency, and deterrence.  They are currently deployed as part of NATO’s Enhanced Forward Presence mission, which aims to establish a conventional deterrent in Eastern Europe.  AS I mentioned earlier, the deterrent effect of forward-deployed heavy forces is also very important within the AFV argument just as it also is for Main Battle Tanks.

In respect of programme delays, LMUK were given a particularly hard time at a previous HCDC hearing – very unfairly in my personal view. Nonetheless, that the Warrior (WCSP) has had issues that have delayed the project is not denied by the company and in written evidence to HCDC Lockheed Martin said that approximately one year of the WCSP demonstration contract delay can be attributed solely to LMUK. This, the company said, was caused by first-time design issues, at a cost to Lockheed Martin of over £100 million.

In addition to the delay solely caused by LMUK (which accounts for 20% of the total delay), the longest delays have been caused by challenges in the provision of GFX (Government Furnished Equipment Assets), the impact of the sale of the MoD owned DSG to Babcock International  and, most significantly, the MoD changing the specification of the canon system in December 2016 (which resulted in a contract amendment).  LMUK assesses that these account for approximately 50% of the total delay.  Other factors have caused 30% of the delay, including the complexity of developing a composite safety case for the upgraded demonstration vehicles, the complexity of the qualification process, and legacy equipment failures during trials.

In regard of first-time issue Lockheed Martin said in written evidence to HCDC In addition to the delay solely caused by LMUK (which accounts for 20% of the total delay), the longest delays have been caused by challenges in the provision of GFX, the impact of the sale of the DSG, and, most significantly, the MoD changing the specification of the cannon system in December 2016 (which resulted in a contract amendment).  LMUK assesses that these account for approximately 50% of the total delay.  Other factors have caused 30% of the delay, including the complexity of developing a composite safety case for the upgraded demonstration vehicles, the complexity of the qualification process, legacy equipment failures during trials and a number of other issues in regard of required safety, trials and COVID related delays.

In further evidence submitted to HCDC, LMUK reminded that the WCSP demonstration contract is a fixed price meaning that the company does not recover cost impacts arising from matters which are not the responsibility of the MoD. As of 31 December 2019, cumulative losses to Lockheed Martin from the WCSP demonstration contract are over £100 million, on a contract value of approximately £300 million. Any changes to the contract made by the MoD are costed and implemented accordingly. Strict reviews are undertaken by DE&S to ensure that MoD-initiated variations are at a fair price. The company also made the strong and very relevant point that as the MoD acts as the systems integrator for WCSP, it should also ensure that it has necessary resources, capacity, and focus to perform that role, including continuity in technical staff.