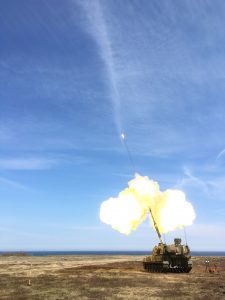 12 Aug 21. The UK MoD is at a critical time in its planning for future conflicts.  Warrior CSP has been cancelled, Ajax is being reviewed and the new Challenger 3 upgrade programme is embryonic.  Boxer looks promising but with so many variants in mind there is a danger it could become a jack of all trades and master of none.  AS90 is old and out of date and the UK Land Strategy has yet to be published.  It was into this environment that the Mobile Fires Platform programme (MFP) was announced as part of the Integrated Review in March 2021.

MFP will involve up to 116 self- propelled howitzers at a cost of around £800m. These smaller agile artillery platforms are designed to receive target data automatically and engage the target with effective fire before moving quickly to a new location.  The Integrated Review was all about integrated multi-domain operations. MFP is a crucial part of that integration jigsaw, with its position as a digital node in the network enabling non line of sight fires – all part of the concept of operational advantage that information superiority brings – which underpins the whole purpose of the digital transformation.  It is the epitome of modernising land fires.

Given the problems with the MoD’s current programmes, Team Thunder, led by Hanwha Defense, believes it should consider a different approach to investing long term in UK sovereign land systems capabilities.  Global Britain is all about establishing meaningful relationships with non-traditional suppliers in the regions that can promise most future work for UK companies.  By casting the net wider for the MFP competitors the MoD can take advantage of the innovations already happening in allied partner countries.  It is time for a fresh approach and Hanwha’s Team Thunder offers that.

Hanwha is offering the UK an advanced version of the K9 Self-Propelled Howitzer, which is already deployed in most other regions in the world and as such there will be on the ground support ready to support the UK K9s in operation.  K9 was selected by several countries including Norway, Estonia, Finland and India because it can move faster for longer, which is optimal for a dispersed battlefield. Australia is another potential customer for the K9, which was shortlisted as the preferred solution for the Australian Army’s LAND 8116 program. An upgrade variant of the K9, the K9A2 can shoot and scoot quicker over all terrain, not merely flat terrain thereby persistently enhancing the close fight.  A wheeled vehicle would have to stop and deploy stabilisers or be rocked by the significant recoil of the 155mm gun. Hanwha’s K9A2 SPG will be fitted with composite rubber tracks (CRT), which give it improved mobility while retaining all the advantages of a tracked armoured vehicle.

In combat the K9A2 Thunder will be supported by the K10 automatic Ammunition Re-supply Vehicle (ARV), the world’s first automated robotic ammunition carrier.  The K10 carries 104 rounds of ammunition, which are passed directly into the K9 ammunition storage magazine automatically along a motorised conveyor.  The K9A2 crew remains under armour throughout the ammunition reload process. K9A2 can already carry more rounds (40 to 48) than a wheeled gun, which means it can fire more missions before resupply is required.  The logistic support of the robotic K10 ARV ensures operational capability of the guns is maintained by a continuous supply of ammunition.

In addition, Hanwha Defense will need to have a robust UK supply chain to establish a firm footprint as they have no current base in the UK. The work will be placed where it can create most benefit, in this case Newcastle upon Tyne and Ampthill. Similar to the industrial and technology transfer that is taking place on the Australian programme, Hanwha would maximise the transfer of the K9A2 build to the UK through its industrial programme for MFP.

Hanwha Defense has a plan to establish a Fires Centre of Excellence (F-COE) in the UK through deep engagement with existing industrial capability and a range of future development programmes. The F-COE will be supported by a national supply chain and a range of academic, educational, skilling and research partnerships.  It will be Hanwha Defense’s home within UK to perform manufacturing, testing, logistics, management, and other functions necessary to fulfil the realization of a sovereign UK Mobile Fires Platform capability.

Hanwha Defense and its Team Thunder partners are exhibiting at DSEI. Hanwha Defense is on stand 217 in Hall number 7 and it would be pleased to meet all interested parties.