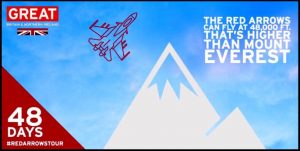 In a Commentary piece written by me on the 13th of July I raised the question of the future of the Farnborough International Air Show and which, due to the C-19 Pandemic had sadly been amongst a raft of planned UK events that had to be cancelled due to lockdown requirements. It had not been my intention to cause annoyance or angst, but I realise that having raised the issue I may have inadvertently done quite the opposite to my original intention.

I also accept the criticism that I made far too little of the importance and relevance of Farnborough International as being one if not THE most important trade show events for global aerospace industry, a place that every two years customers and foreign delegations can come together and equally so, that allows the UK domestic aerospace industry to demonstrate that, despite everything that has hit it over the past couple of years, it is continuing to invest in its own future in order to maintain the huge position it has established within the global aerospace industry.

Although the Farnborough International Air Show could not take place in 2020 as planned the organisers very sensibly replaced the show with a digital based event called FIA Connect and which aimed to bring industry, government and academia together for a conference that would focus on technology and ingenuity driving business growth.

FIA Connect was, as I said in my piece, a great idea and indeed, by all accounts a great success with 250 senior executives, academics and politicians being joined by 14,000 delegates from 97 countries and I went so far as to suggest that it may point the way to the future.

To that end I had posed a question and invited responses in relation to the relevance of continuing to hold the bi-annual Farnborough International Airshow event. I should add here that in doing so it was not my intention to make any suggestion in relation to the future of Farnborough International – merely to look to the future and open discussion.

I received a number of interesting responses but having clearly caused some alarm by posing a question – something that was certainly not my intention – I felt that it was only right that I should give the organisers of Farnborough International, a wholly owned subsidiary of the trade organisation ADS, the ability to respond.

This they have now done and I have copied below what I believe to be an excellent, informative and necessarily vibrant response from ADS Chief Executive (Interim) Kevin Craven and one which also outlines their own views for the future.

I am very grateful to Kevin Craven for his response and I hope this will go some way to alleviating concerns and pointing the way forward for the what has long been one of the most important global aerospace events:

I have always enjoyed your column and admired your expertise – you are rightly respected by many for the insights you bring to the sector.  I was, however, deeply surprised and disappointed by your column on Farnborough. I recognise the tongue in cheek nature of some of your comments and the need to be more provocative than mild, however I am afraid that on this occasion I believe you were very wide of the mark.

I was surprised because you broadly ignored the enormous value of the tradeshow element of the event. Farnborough is the place where the aerospace and defence world comes together – the 2018 Airshow was the most international ever with our delegations’ programme and international country pavilions seeing major growth. $192bn worth of deals were signed, with a value of $28bn to the UK, the second highest figure in the Airshow history.  Post Brexit, post Covid (we hope), there can be no better showcase for our country’s Global Britain and Net Zero ambitions.

I was disappointed because Farnborough 2022 is ideally placed to be a critical event that signals the recovery of the aerospace sector post the worst crisis in three decades, and acts as the stage to set out the industry’s far-reaching ambitions for the future. Any decline in support for Farnborough at home would be perceived internationally as a decline in UK aerospace ambitions.  Both the long-standing heritage of Farnborough, and wide support and involvement from Government in the show (including multiple major departments such as BEIS, MOD, DfT, DIT all of whom send ministers and support our engagement programmes) are recognised and seen positively on a global basis.

I love RIAT and think the flying is spectacular.  Long may it continue!  But RIAT has a different role and a different audience – Farnborough is one of the great international business events with a unique and incredibly valuable aerospace flavour.

The question you should be asking is – how do we make it better, not how do we bury it. I do however acknowledge your point about how do we keep it relevant and interesting for the public as well – that is worth asking.

ADS and Farnborough International are working very hard on those questions and investing heavily in the site and facilities to ensure that not only does the bi-annual event get better but it also becomes a major milestone in a much wider programme that celebrates the sprit and importance of aerospace at a time when the threat to the industry through energy transition is pretty large.

The show is aiming to grow, we want to host important developments in the challenge of achieving net zero, future combat air, and space. Our UK industry and Government ambition is to drive the global agenda on these key issues, with Farnborough as the recognised and established platform to profile, showcase and bring these things to life.

The online elements will help to widen the audience, absolutely not to replace the event. We are thrilled with the success of FIA Connect but again it is part of building that wider platform with the Farnborough Air & Trade Show being the cornerstone not the past.

I am sure you will have provoked many replies – that was your intent, I know – but I do think both the current context and the future of aerospace needs positive and constructive comment.