BATTLESPACE Editor Julian Nettlefold met up remotely with Eben Frankenberg, Co-Founder and CEO of Echodyne, the radar platform company, a candidate for the 2022 BATTLESPACE Businessman Of The Year.

Echodyne’s core metamaterials ESA technology is applicable to radar solutions across multiple markets and applications. From ground and airborne radars for uncrewed aircraft systems (UAS) and advanced prototypes for autonomous vehicles to counter-UAS systems, border surveillance, and sensitive asset security, Echodyne has proven its ability to deliver breakthrough radars for their customers. Very low SWaP, multiple rich data output types, and being software-customizable to user or mission requirements are among its attractive features.

Echodyne employs ~130 people creating breakthrough beam-steering radars for a range of existing and new defence, security, and autonomous machine applications. Its patents cover a range of inventions for designing and manufacturing electronically scanned array (ESA) radars in low SWaP formats and combining them with powerful, intelligent software. Their tagline is “Radar Reinvented” and they appear to be ready for international expansion. 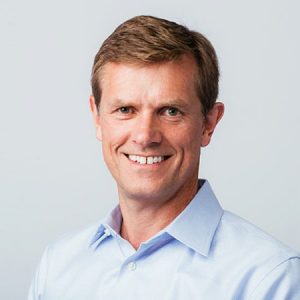 “What do you see as the differentiator provided by the unique Echodyne technology?” Julian Nettlefold asked.

“Our technology allows us to create radars with an unprecedented combination of high-performance and low SWaP-C (size, weight, power, cost). We bring the benefits of electronically scanned array radars, which are considered the gold standard in radar, to applications and markets that would never be able to afford ESAs made the typical way.

Put in simpler terms, our customers get equivalent (or even higher) performance for much less money, or for the same amount of money they get significantly superior performance. Either way it’s a win for them. And the great news here is that our customers consistently tell us that our radars deliver exactly as we describe and far better than anything else at anywhere close to our price points.”

“How did you come to join Echodyne?” The Editor asked Eben Frankenberg.

“I was at a company called Intellectual Ventures (IV) which is run by Nathan Myhrvold, the former CTO of Microsoft, who has the unique distinction of having only worked for Stephen Hawking and Bill Gates. Intellectual Ventures was working with Professor David Smith of Duke University in the USA and Sir John Pendry of Imperial College, London on a bunch of ideas using Metamaterial technology. One of my responsibilities was to help create new companies to take the best of these ideas to market. Normally I would help find a CEO and CTO to lead these new companies and help structure the initial fund-raising. Once they were launched, I’d start over again on the next one. But I was so excited about the radar idea that I decided to leave IV and co-found it with CTO Tom Driscoll PhD in December 2014. Echodyne is based in Kirkland, Washington, and is privately held with backing from Bill Gates, NEA, Madrona Venture Group, Vulcan Capital, and Vanedge Capital among others. It’s not often you get the chance to change an industry by bringing truly revolutionary technology to market – technology that disrupts existing markets and creates vast new ones. It’s difficult and challenging work, but it’s also exciting, energizing, satisfying, and rewarding.” Eben Frankenberg said.

“What differentiates Echodyne from other radar companies?”

“Our business proposition is straightforward, radar is an indispensable and incredibly effective and valuable all-weather sensor that has been trusted by militaries, aviators, and mariners for decades. But the broad use of radar has been hampered by unattractive price-performance characteristics. Our breakthrough radar technology changes the price-performance trade-off and unlocks the power of radar for many new applications. We combine revolutionary technology with intelligent software to create radar sensors with unprecedented performance at commercial prices.”

“Can you tell us more about your technology?”

“Our breakthrough Metamaterial-ESA technology unlocks a level of beamforming previously only available with large ultra-expensive AESA’s with many hundreds of transmit/receive modules. Our radars combine this precise beamforming capability with modern fully-adaptive cognitive-radar approaches and intelligent control software, and the result is radars with best-in-class detection, tracking, and classification performance.” Tom Driscoll, CTO of Echodyne, said.

“Can you describe your customer base.”

“Our low SWaP, high performance ESA radar unlocks dozens of applications across multiple markets. We are very active in the broader perimeter and border security applications where high-quality radar at commercial prices unlocks surveillance potential that enhances situational awareness and saves agents lives. The U.S Department of Homeland Security awarded Echodyne a multi-year $20 million IDIQ contract, which demonstrates and validates our radars for fixed and portable use cases. Our radars are also used by just about every other U.S agency involved in national security and intelligence gathering. We are also active in and beginning to see growth from the critical infrastructure components of industry as that segment begins to enhance their security platform to include airspace surveillance.” Eben Frankenberg said.

“Echodyne radars are also to be found across the Uncrewed Aircraft Systems (UAS) market. We offer both ground-based and airborne radars that provide unrivalled situational awareness, especially for Beyond Visual Line of Sight (BVLOS) applications. Rounding out our approach to machines, we have also produced a ground vehicle radar prototype for high autonomy applications.

“For BATTLESPACE readers, we are most applicable to short and medium range Defence and National Security applications. The military suppliers who design and deliver advanced tactical solutions for MoD customers are especially interested in significant jumps in sensor performance. Well, once they get over the disbelief that an ESA radar can fit in your hand. There are fixed, on-the-halt, and on-the-move applications where our radars provide breakthrough performance. For fixed applications, our radars are included in the U.S. Army’s security and surveillance system (SSS) program for base protection. The low SWaP advantages of our radar really excel for on-the-halt applications. A tripod, radar, cables, power, and computer are bundled into one pack weighing less than 20lbs for a truly man-portable ISR solution that can be up and running in less than 10 minutes.

“One of the more pertinent applications is counter-UAS, where our radars have been incorporated into dozens of systems and solutions. In the public domain are two examples: a Bushmaster Chain Gun from Northrop Grumman and a Titanis Directed Energy platform from EOS (Australia). We will be introducing an on-the-move capability in our new radar, EchoShield, that promises to enhance battlespace ISR and provide exceptional detection, tracking, and targeting capabilities.”

“You have developed a particular expertise in providing radars for Counter-UAS applications?”

“Yes, our 4D ESA radars are an excellent fit for C-UAS applications. Obviously, Defence has a lot of interest in Counter-UAS systems. But other sensitive government facilities and critical infrastructure also have interest as well. And in addition to fixed sites, there’s a lot of interest in portable or mobile solutions. With EchoShield and EchoGuard, we have radars that span the performance and deployment requirements across most of these markets. The markets share a baseline need to reliably detect and track small fast nimble drones with high precision and rapidly deliver radar data into higher level systems for fusion, decision making, and whatever mitigation may follow. The markets differ primarily in range requirements and the need for data precision, with MOD customers wanting more of both. And relative to our unique technology, we deliver a financial symmetry of commercially priced, ESA radars as primary components in solution stacks, like the previously noted Bushmaster Chain Gun or Titanis Directed Energy examples.”

“The Northrop Grumman Bushmaster Chain Gun Counter-UAS system with the EchoGuard radar. Can you give us more details of that unit?”

“Yes, we are working on a number of projects with Northrop Grumman. The EchoGuard radar integrated with the Bushmaster Chain Gun is in the public domain and, by all accounts, is very operationally effective. As you can appreciate, any comments or details about a customer system must come from that customer directly. “ 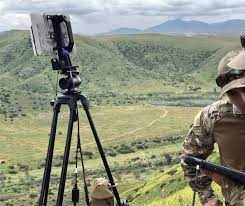 “Where do you see Echodyne in ten years?”

“Our goal is to make the world safer through high-performance commercial radars. Radar is a phenomenal sensor, but it’s barely begun to scratch the surface of its full potential. The MESA technology that’s at the heart of our radars combined with rich software can unlock radar’s potential across a large number of markets covering ground, air, and maritime applications. We hope to become a dominant supplier of radars across many of these markets.” Eben Frankenberg concluded.

Eben Frankenberg and family reside in the Pacific Northwest.

Prior to joining Intellectual Ventures, Eben spent 9 years at Onyx Software Corporation in various executive leadership roles. From 1995-2000, he led sales and marketing as the company grew from $2M to $160M annual run rate and went from basement start-up to 800 person publicly traded NASDAQ company. Eben has a B.A. from Dartmouth, and a M.S. from Stanford.