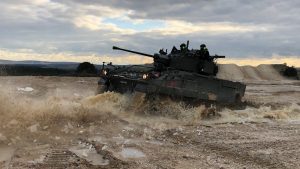 In an extremely short defence related comment today in relation to increasing speculation ahead of the next stage Integrated Review publication in a couple of weeks’ time I make no apology for suggesting that the Army is long overdue change and some radical rethinking in order that it can transform and adapt to a new world whilst making itself more efficient. Affordability of strong Army should never be an issue but adapting and changing in order to meet and challenge the constantly changing level of threat certainly is.

Last week ‘The Times’ informed its readers that the Army is set to be reduced to 72,500 personnel – down from the current formal plan that envisaged Army numbers at 82,000 personnel but that many believe is currently sitting at a number closer to 77,000. Of total Army personnel employed those that are fully battle trained and ready for combat are estimated to be little over one third.

It is unusual that I comment on Army related matters outside of equipment procurement related capability issues and I will limit my comments on Army numbers to others that specialise in this area. But I will say that I share the view of Ben Barry of the International Institute of Strategic Studies (IISS) who belief is that as aspirations are clearly in existence for the Army to do more further away in respect pf future deployment that our forces “cannot be everywhere at once”.

Translated to future equipment needs would be to suggest that while we may not be able to envisage future deployment requirements, we must ensure that Army personnel have a full range of equipment that they may need. Our NATO commitment remains as strong as ever but I doubt that our major allies will see further cutting of Army numbers as being anything other than a position being taken out of weakness rather than strength.

So, another day and yet more MOD leaks in respect of future Army capability requirements and intentions have appeared. ‘The Times’ which over the past couple of years appears to have become the MOD’s ‘vehicle’ of choice to test the waters of opinion on future defence capability requirement issues has this morning informed readers that “Dozens of [Challenger] tanks will be scrapped and the remainder upgraded to make them “battle proof for future conflicts” under proposals put forward by the Army. In addition, the newspaper says that the rather than upgrade a large number of the 758 Warrior Armoured Fighting Vehicles under what is known as the Warrior Capability Sustainment Programme that these could also be retired and replaced by 500 new armoured personnel carriers ahead of schedule.

That the MOD would be very unlikely to upgrade all remaining Challenger 2 in current service or stored has long been a ‘given’ but if true, the very strong hint in the article that the intention is to go ahead with a £150 million  upgrade of 150 Challenger 2  tanks to a new Challenger 3 specification, with new turrets and a Rheinmetall 120mm smoothbore gun is at least to be considered as very good news. The article suggests that the remaining 77 Challenger 2 tanks will be scrapped.

But that is where any good news in this article starts and ends. Having written several times in the past on the crucial importance of maintaining and upgrading Warrior Armoured Fighting Vehicle I find any suggestion that the planned upgrade and sustainment programme (Warrior CSP) will now not go ahead as extremely worrying.

The need for Warrior CSP alongside that of the new Ajax Armoured Fighting Vehicles capability that the MOD ordered (589 Ajax vehicles of which 245 are turreted were ordered from General Dynamics as part of a £4.5 billion deal that was recast in in 2019) has lost none of its importance. Although rumours have persisted, there is no suggestion in the Times article that numbers of Ajax vehicles currently on order might be cut.

Warrior is already long proven battlefield capability and in CSP form with a new turret it has completed MOD testing. That Ajax will be a very competent capability for the Army is not disputed in any way despite delays that the programme has suffered along the way but in terms of the numbers of personnel that either vehicle can carry Warrior wins that particular hands down.

It is unclear whether the suggestion that Warrior could be replaced by 500 new armoured personnel carriers ahead of schedule is a reference to Ajax or Boxer MIV – the latter being a wheeled rather than tracked armoured fighting vehicle of which in 2019 under a contract reported to be worth £2.8 billion the MOD ordered 500 units. Boxer is I am sure a great vehicle capability but being wheeled rather than tracked suffice to say overall capability is limited.

The Times notes that “redesign” of the Army was discussed during a meeting with ministers at the MOD on Monday and that plans are expected to be signed off within days in order to be outlined in a “defence command” white paper which we are told is now due to be published after a wider “integrated” review is published next month. The latter by the way is still due for published week beginning March 8th although I continue to doubt this will be the full format originally envisaged and that contains the full defence, security and foreign policy strategy link.