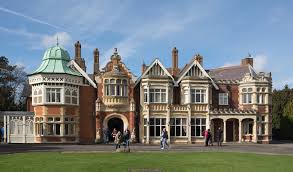 I wouldn’t disagree for a moment that over the years since its work finished at the end of World War 2 that Bletchley Park has been placed on something of a pedestal but to suggest that the vital work that it did has been over-rated by the public by the author of an official history of GCHQ beggars belief.

The older I get the angrier I become when I see or hear of re-writing of history for personal gain. Of course, I readily accept that some of those who write their autobiographies can and do sometimes over exaggerate what they did, how they did it what they achieved and conveniently leave out parts in which they failed or made a mistake. Winston Churchill’s six volumes of ‘The Second World War’ are no exception to that rule while politicians in the immediate past have a tendency to leave out sections where this would require deep criticism of another individual who may well still be alive.

But I strongly dislike the modern tendency to rewrite history almost to the point that a person or entity that we were brought up to believe was good, was the right person for the job at the right time, that was an organisation that we have been brought up to almost revere, is suddenly portrayed as being far from that.

Everybody has faults of course and everybody exaggerates. I well recall an interview with the US tennis player and now commentator, John McEnroe when the great man was answering questions  about his own professional tennis career walking around the grounds of Wimbledon in a rain break and answering one question from the interviewer with these words “you know, the older I get the better I was”.

This year has seen the reputations of many ‘so-called’ famous people who played a part in the history of the UK seriously damaged. Winston Churchill is often portrayed today a man who, because of past mistakes, was unfit for the office of prime minister in 1940. I am sorry if this offends, but whatever were Winston Churchills failing – and they were many – does not and cannot hide the absolute fact for me that that he was at that time in 1940 the only person we could turn to for leadership, sheer willpower in the face of adversity, his ability to challenge, motivate and succeed.

Back to the Bletchley Park book, one that is apparently written by a Professor John Ferris of the University of Calgary in which he ‘suggests’ although as far as I can so far observe, provides little evidence for his view, that the code-breaking hub contribution to WW2 was not the war winner that a lot of Brits think it is although he generously concedes that Bletchley still played an important role. Heaven only knows what the handful of remaining people alive who worked there are thinking if they have had the misfortune to read the headlines of this particular story today. Very angry I venture to suggest!

As Stanley Gibbons was to stamp collectors, the Spitfire and Hurricane aircraft were in the Battle of Britain, the decryption work done at Bletchley Park in Buckinghamshire under the auspices of GCHQ, became Britain’s listening post, decrypting German messages and the so-called Enigma communications, together with commands made by the Nazi administration to battleships, U-Boats and submarines and of their proposed movements in order to ensure wherever practicable, allied commanders could if possible be one step ahead of Nazi Germany.

Did they get it right all of the time? Of course not. Did they make mistakes? I would be very surprised if they did not make many mistakes. Yes, maybe some of the work of those at Bletchley Park may have been exaggerated. Such was the vital importance of the work that the many military men women and civilians working at Bletchley Park in what was an absolutely top-secret environment achieved during the war meant that this was not unclassified until 1975 meaning no one who worked there was allowed to talk about it.

It is also true that the Bletchley Park museum presents a rather different and ghostly presence when compared to other museums that tell the story of war. Bletchley Park today may be considered ‘artefact’ light due to so much of what in other circumstances might have been preserved being destroyed after the war because of its potential importance to would-be adversaries.

I suggest that Professor Ferris should be invited by Bletchley Park and put in front of as many remaining survivors as the Trust can find to argue that he is wrong to minimise the vitally important role that Bletchley Park played during WW2. No one has ever said that Bletchley Park won the war for the allies but what they can surely agree on is that the amazing and very secret work conducted by staff at Bletchley Park most probably shortened the war by a minimum of a year and quite probably longer.

It seems all too easy to challenge realities these days just as it also does long held myths that we were brought up on. History is no longer taught as it was and it appears that it is no politically correct to teach about how many people gave their lives in the ‘Great War and the Second World War that followed in its wake.

Those that we have for two hundred years and more held up as examples of greatness for what they did during our period of Empire or when we were merely defending ourselves from tyranny are these days increasingly mocked. This week, because so much time has passed since he successfully defeated his enemies at Trafalgar, Admiral Lord Nelson came into the firing line – not for what he did – but because so much time had passed.

History is important for all nations and all people. There is and should always be room for different interpretations of history but I for one, whether right or wrong or for good or ill,  do not hold with a view that modern day desires for political correctness should be allowed to interfere with history. Neither do I believe in rewriting history and reversing its consequences unless there is very good reason so to do.

Finally, as I have said before and I am sorry if this offends some, but I do not believe it should be a requirement of our generation to apologise for the misdemeanours and failings of those who went before us.