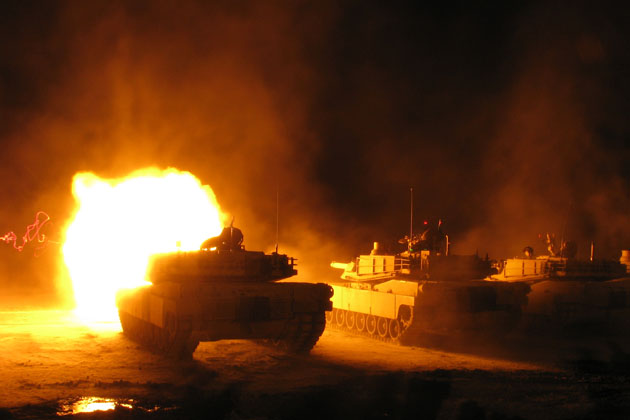 A revolution is occurring in armaments that is as great as the move from smoothbore to rifled weapons. It portends a leap in lethality and effectiveness to a wide range of current guns and will provide an answer to many of today’s new asymmetrical threats, ranging from small teams with guided anti-tank weapons to heavy machine guns on the back of pick-up trucks.

The answer is new programmable ammunition. The capabilities these technologies provide to the combat vehicle mounted gun in particular, but not exclusively, has the potential to return their battlefield advantage.

ABOVE: The Rheinmetall DM131 is an air burst projectile for the 40mm automatic grenade launcher that allows it to detonate above the target, increasing lethality and hitting targets behind cover.to ranges of 2,400m. (Photo: Rheinmetall)

Several US and European companies, including Diehl, Orbital ATK, Rheinmetall, and others, have developed such munitions. Some of these have been international industry collaborations. The concept is being applied to direct fire guns from 25 to 120mm (meaning it can be employed on infantry fighting and reconnaissance vehicles to MBTs).

Using programmable ammunition both broadens the targets these guns can engage while magnifying the on target effect. These new rounds provide effective solutions to battlefield challenges of everything from armed helicopters to ATGM and RPG teams, insurgents in buildings, entrenched troops and even fast moving technicals.

Programmable ammunition allows one round to be optimised for its effect on various targets. In addition, most existing guns can be fitted out to utilise this capability. For example, the Rheinmetall DM11 for the 120mm tank gun has three different fuse modes: an impact point detonation (PD); a point detonation with delay (PDwD) in which the warhead penetrates then explodes; and airburst (AB).

The AB can be fired up to 5,000m to explode above or in front of the target. The mode is selected by the gunner and is programmed with the necessary parameters to optimise the effect with the round in the gun tube.

By simply selecting the target type and ranging, the Target Driven Man Machine Interface automatically sets all parameters essential to maximising target results. This can even include automatically executing a programmed multiple round firing pattern.

Although a 25mm LW25 PABM (Programmable Air Burst Munition) has been developed by Orbital ATK, the approach shows its highest results in 30mm and larger calibres. This is a factor of the additional load that these can carry – both in bursting charge and pellets and/or fragmentation.

The benefits are not simply down-range but more effectively defeating a target in single engagement saves ammunition and provides more ‘stowed kills’ (i.e. the number of kills that can be made with the ammunition onboard). It also reduces the number of ammunition types needed to address different situations.

The company has just been awarded a $45 million contract for final development and qualification of the AMP round over a 30-month cycle with three options for initial and full rate production that could eventually lead to a contract value of $119 million.

Both higher velocity guns and lower velocity weapons become more capable through programmable ammunition. Nammo is offering an automatic grenade launcher with its MK285 PPHE/SD (Programmable Prefragmented High Explosive) ammunition. The round has an electronic programmable time fuse that, coupled with a weapon’s advanced fire control, allows not only greater target area coverage but can also kill targets in defilade.

This round uses the donut effect of a high explosive throwing a fragments in a circular pattern. Another approach uses a small charge that expels in a cone shape (around 15° size) the hundreds or thousands of often tungsten pellets in front of the target. The later is particularly effective against ATGM and machine gun teams, troops in the open, helicopters, UAVs, as well as bunker apertures.

The past focus on the armoured target killing capability of the combat vehicle armament neglected the importance of their role in effectively addressing the broader needs of combat operations.

With the proliferation of new threats the limited ability to respond to them became a potentially fatal shortcoming. The introduction of programmable ammunition is providing a technical solution. Now unit tactics and crew procedures and training need to be adapted to take advantage of these capabilities.