The 2021 G7 summit brought together the world’s primary democracies and leaders to discuss the impending challenges of the next decade. Such an event provides a stage for demonstrating groups to obtain global media attention. Whilst the UK constitution and Police Forces support peaceful protest, there were concerns this summit would be threatened by non-peaceful activities, as seen earlier in the year.

With worldwide attention of the event, Devon and Cornwall Police, the service leading the multi-agency Operation Trelawny to provide a safe and secure G7 summit, sought cutting-edge technologies to provide new sources of critical intelligence. This resulted in a partnership with Akumen, an industry leading UK-based intelligence and influence monitoring company.

For the duration of Operation Trelawny, Akumen worked in collaboration with Devon and Cornwall Police to identify and monitor relevant conversations occurring in the public domain.

This involved using Akumen’s in-house semi-automated scraping technologies to obtain over 135,000 pieces of text data during the 4 day event (9th-13th June), obtained from a wide range of legally approved and GDPR compliant public-domain online sources. Once collated, this data was processed by Akumen’s Emotion Analytics engine to provide Police command real-time insights into mood and behavioural drivers of the crowd and protestor groups.

Different to other text analytics solutions on the market, Akumen base their advanced insights primarily on identifying emotions in stakeholder text comments, rather than just sentiment. As emotions drive behaviour, unlike sentiment, this enables a fuller understanding of the complete behavioural chain.

Akumen’s capability supports real-time monitoring of the emotional trends within individual groups and at specific geographical locations. This highly accurate and specific, evidence-based, and real-time intelligence stream provides a new level of perspective and clarity to the security forces. It ensures operational and resourcing decisions are more informed and justified.

Emotion Analytics: The emotional profile across the whole event modelled more of a carnival than a riot. Benchmarking the levels of anger identified by Akumen in the text data during the G7 summit against the protests that turned violent in Bristol earlier in the year, shows a step-change. Modelling is ongoing with a larger dataset to more accurately identify the critical transition point that indicates increased likelihood of violent direct action occurring. 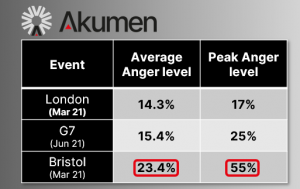 Psycholinguistics: An important group of psycholinguistics was used to analyse the multi-level contextuality within the human generated comments, including ‘Absolutes’, ‘Expletives’, and ‘High Intensifiers’, all of which peak prior to significant mood changes. Trending of these variables identified an upward pattern in frequency and intensity on the last day of the G7 summit. The concurrent peak of these 3 variables mid-afternoon directly preceded the two main incidents of Non-Violent Direct Action (NVDA) that occurred as the summit closed and VIP’s departed, confirming these variables can be used to predict critical mood changes.

Noteworthy was the fact that most negative opinion was directed towards ‘Political Leaders’ in comparison to a low level of negativity expressed about the ‘Police Force’. Another key cohort to track is ‘Provocateurs’ (described as those who incite unpeaceful activity). Although there were no provocateur comments over the G7 summit period, Akumen’s system identified 0.46 % of comments during the Bristol riots (March 2021) were from provocateurs, where there was violence towards the authorities. The ability to identify such a valuable weak signal will be a critical capability for security services going forward. 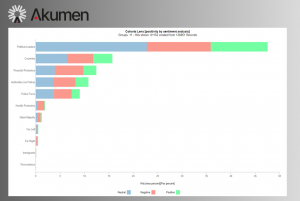 Society Analytics – Bonus Module: Protest activity typically exists as a microcosm aspect of the mood of the whole society it exists within. Akumen included elements of their wider Society Analytics module to enable monitoring of positive or negative movement of opinion (and the causes of any change) across 12 integral themes of concern for any population group:

These 12 themes are the key drivers of either social harmony or anarchy. Akumen provides users with the critical understanding of what drives all aspects of the mood of society or specific groups within it. During the G7 summit the two largest themes about which the wider population communicated strong negativity were ‘Human Rights & Freedom’ and ‘Environmental Exploitation’. 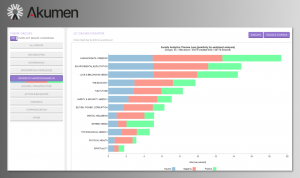 Akumen also created a novel software package to allow police officers on the ground (Bronze) to report their observations about the size, mood, and movement of crowds via mobile phone. This data was immediately available to Police leaders, displayed alongside Akumen’s crowd mood analytics software, as a layered tactical map on screens within Silver Command, Protest Command, and the Strategic Co-ordination Group (SCG) operation rooms. This new software also provided a back-up communication channel should traditional Radio Frequency (RF) channels have failed or become overly congested. 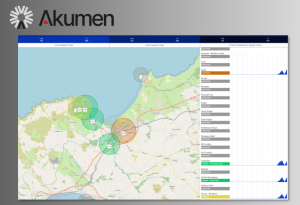 This app provided decision makers with a real-time visual situational awareness tool enabling them to monitor crowd activity effectively. It also collected a significant dataset that has since been used to improve statistical correlation between the public domain data and Akumen’s forecasting algorithms using Machine Learning (ML).

As Akumen’s platform also highlights the most common language used within the public domain comments, including symbolic language, the Police media team was able to react quickly and effectively, using highly targeted language,  to positively affect public narrative and understanding.

Conclusion: The project was deemed a comprehensive success by all involved parties. Akumen’s analytic capabilities gave results that correlated with local police reports, were able to forecast the increased direct action of protest groups, and gave actionable and accurate decision changing insights into developing situations across multiple locations.

AI-driven programs for OSINT and SOCMINT analysis will increasingly become industry-standard for improved management of crowds, monitoring of social demographic groups, and supporting brand image for security services globally. Akumen continues development of this, and associated capabilities, with other UK Police Forces.

Akumen provides innovative listening capabilities and analytical tools that identify and deliver a new type of emotional and behavioural intelligence about society and organisations to drive better outcomes. This capability is cost-effectively and quickly integrated into public services across multiple sectors globally. Other partners include the NHS, Accenture, and Civica.