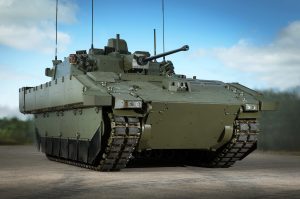 Confirmation at the House of Commons Defence Select Committee (HDC) hearing from Defence Procurement Minister, Jeremy Quin that an independent expert is being sought to evaluate the £5.5bn Ajax AFV (Armoured Fighting Vehicle) programme is very welcome and tacit admission from the minister that the project may be cancelled suggest that the MOD is now not only being more honest about the issues but also warming those involved to potentially expect the worst.

To that end Major General Timothy Hodgetts confirmed at the hearing that the Army was now looking at alternatives. If so and if the Army is to have a vehicle fit for purpose and able to do the job required within a suitable time frame my answer is that the decision announced in the Integrated Review process to cancel the Warrior Infantry Fighting Vehicle upgrade programme should be immediately reversed.

There would appear to be so many problem issues on Ajax to resolve that experience  suggest that even if all of these could be resolved it would probably take in excess of five years; increase the overall cost substantially and even then, leave an unacceptable element of risk and loss of confidence in those who would use the capability. Better by far that the MOD walk away from the programme than take on any further additional risk.

Trials of the Ajax AFV have already been paused due to safety concerns following personnel complaining of vibration injuries, hearing loss, nausea and possible spinal injuries. To make matters worse a leaked internal report claimed that Ajax was unable to travel safely at speeds over 20 mph because crew members were suffering noise that was claimed to be so loud it made them feel sick. There are also unsubstantiated claims that the vehicle could not be fired on the move.

Ajax AFV is a fixed price contract for the defined contract requirements that covers demonstration, vehicle production, training systems and in-service support. The contract value is £4.62bn (excluding VAT). Initial Operating Capability had originally been scheduled for 2020 with full operating capability forecast for 2025.

Reassessment is now on the cards and Jeremy Quin told the Committee that “We are currently undertaking a search for the right person who will be responsible for the delivery of this programme through to FOC (Full Operational Capability) or informing ministers if – something which we sincerely hope is not the case – this is for any reason unachievable”.

One member of the HDC, Mark Francois MP, made the comment that “If you are having to give people steroid injections after having been in the vehicle, that tells you everything you need to know. It was time to ‘rip the plaster off’ and cancel it”

Committee chairman Tobias Ellwood welcomed Mr. Quin’s ‘willingness to conduct a review and make a sober assessment as to whether you can genuinely go forward with this or whether it is then time to draw a line’.

The MOD selected General Dynamics to develop what was then known as ‘Scout’ and later renamed ‘Ajax’ back in 2010. A fixed price contract to build 589 vehicles across six variants was signed in 2014 with the total cost of the programme envisaged at £5.3bn. Following much speculation and leaks in regard of programme issues, in June 2020 the MOD confirmed that following delivery of the first batch of production standard none turreted vehicles being found to be unfit for purpose announced a programme reassessment. Problems had been identified by the MOD’s Major Projects Portfolio sponsor group which monitors performance of all major procurement programmes.

General Dynamics had already laid out its version of the problems besetting Ajax in written evidence delivered to the Committee. Referring specifically to the noise and vibration issues the company said that “it was working closely with the MoD to fully investigate these reports, identify and address potential causes”. According to General Dynamics, by the start of July this year payments from the MOD to the company had totalled £2.65 billion.

General Dynamics Land Systems – UK vice president and general manager Carew Wilks who was between 2011 and 2013 Director Land equipment at the MOD’s procurement operation at Abbey Wood, Bristol and whose earlier career had been spent as an Army Engineering Officer, is now under huge pressure to either resolve the problems or accept the consequences of cancellation.

In its defence, General Dynamics written evidence to the Committee confirmed that” as of 1st July 2021, the company had completed the build of 271 Ajax armoured hulls and 60 turrets. All six variants are in full production and 116 vehicles have been fully built and are delivered, or in the handover process.”  The company also stated that 25 vehicles built in order to meet Initial Operating Capability have been delivered and, according to the company, “accepted by the Army”. These including 12 AJAX variants equipped with the 40mm cannon and which I would add have been successfully live fired by the British Army as part of the acceptance process.

According to General Dynamics the Ajax programme supports 800 personnel working at Merthyr Tydfil and Oakdale together with a UK supply chain of 3,300 direct jobs. However, it should not be ignored that the MoD had confirmed as far back as 2016 that almost 100 Ajax vehicles would be manufactured in Spain. In a written statement to the UK Parliament, the MoD had also confirmed that hulls for a further 489 armoured fighting vehicles would also be built in Spain before being transported to the Merthyr Tydfil facility in Wales for final assembly.  This was not covered by the House of Commons Defence Select Committee yesterday no was it referred to in evidence supplied by General Dynamics.

I would of course like to see a programme that is now eleven years into its development phase and seven years into its production phase succeed. That remains a possibility but the odds against success are also stacking up. I have in my long career observing and supporting UK defence seen too many programmes in which the MOD delayed accepting the inevitable, that success would be too hard and too costly to achieve. I have of course also seen programmes that the MoD has pulled away from with no satisfactory reason. I can only hope that after the planned independent re-assessment, the right decision is made.